“After careful deliberation and consultation, I am pleased to name Jim Hooker as anchor of NJN News Aron announced. “Jim is a seasoned journalist with deep background in the issues and politics of the state and credibility in the state capitol. He has represented NJN nationally and abroad, and at forums around the state. He brings weight and years of experience to the anchor chair. Jim also will be managing editor of the news and will be influential in the overall direction and tone of the newscast.”

“As NJN News State House correspondent, Jim Hooker brings two decades of award-winning reporting to build on the legacy that Kent Manahan has established as anchor,” said Elizabeth Christopherson, executive director of NJN Public Television and Radio. “We are delighted to recognize other members of the NJN award-winning team: Mike Curtis, the current producer of NJN News, who has been promoted to executive producer, and Peggy Micucci, assignment editor, who will be executive editor.” 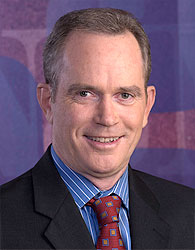