A veteran of the last GOP gubernatorial primary, Morris County Freeholder JohnMurphy says he likely won’t run for governor if either biotech businessman John Crowley or U.S. Attorney Christopher J. Christie gets in the race to challenge Gov. Jon Corzine.

“Being from Morris County, it would not be prudent for me to run against Chris, who’s also from Morris, of course, and has great name ID,” Murphy said. “I’m not a glutton for punishment.”

Then there’s Crowley, a question mark ever since he looked ready to run against U.S. Sen. Frank Lautenberg (D-Cliffside Park) then backed down – only to resurface as a GOP organizer and host of a riverboat cruise down the Mississippi River at the Republican National Convention.

Murphy went on that cruise and spent some additional quality time in Minnesota with Crowley, a naval intelligence officer who established his own company to find a cure to the disease suffered by two of his children.

“I really like John Crowley,” said Murphy. “I don’t believe he’s made a decision yet. But given his life experiences one would expect he’d be a very formidable candidate.” 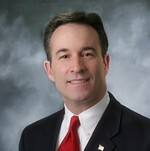