Democratic pollster Don Herche, who passed away last night, began his political career in 1974 as a young staffer on the campaign of Democrat Helen Stevenson Meyner, the former First Lady of New Jersey who was a candidate for Congress in a heavily Republican district.

The story of Meyner's congressional campaign actually begins four years earlier when Republicans cut a deal to clear the field for GOP State Chairman Nelson Gross in the race for U.S. Senate. One potential primary rival, Morris County State Sen. Joseph Maraziti, dropped his statewide bid with the promise that he would chair the committee that drew new congressional districts after the 1970 census.

Maraziti drew what became known as the Maraziti district: a Democratic House seat in Hudson County was eliminated (forcing two incumbents to face off in a primary), and replaced with a new seat in northwestern New Jersey that included Hunterdon, Sussex and Warren counties, part of Morris, and a small part of western Mercer. The district was so Republican that Richard Nixon carried it with 70% of the vote against George McGovern. (In 2008, Republican House candidates won 64% of the vote in the towns that make up the old thirteenth district.)

As a candidate for Congress, the 60-year-old Maraziti won 50% in the GOP primary, defeating Sussex Assemblyman Walter Keough-Dwyer (25%) and Mercer Assemblyman Karl Weidel (17%).

In the general election, Maraziti faced Meyner, 43, a cousin of Democratic presidential candidate Adlai Stevenson and the wife of Robert Meyner, who served as Governor from 1954 to 1962. Maraziti won 56%-43%.

As a freshman Congressman, Maraziti won a seat on the House Judiciary Committee, which put him in the national spotlight as a staunch defender of Nixon. He voted against all three articles of impeachment. Meyner decided to run again in 1974.

Her campaign, the one Herche worked on, was helped by the disclosure that Maraziti put his girlfriend, 35-year-old Linda Collinson, on his congressional payroll in a no-show job — one of the highest salaries on his staff — while she worked at a Whippany law firm. Collinson was outed when she applied for a loan with the House credit union and a staffer who answered the phone in Maraziti's office said she had never heard of her. Real estate records also listed the house where Collinson lived as owned by Maraziti.

Late in the campaign, the Hackettstown Star-Gazette fired their managing editor, Donald Thatcher, after the Meyner campaign pointed out that Maraziti put Thatcher on his congressional payroll to write press releases. Nicholas DeRienzo, who was the general manager of two northwestern New Jersey radio stations, WCRV and WFMV-FM, was also put on Maraziti's payroll.

In the end, in this heavily Republican district, the contest wasn't even close: Meyner beat Maraziti 57%-43%.

Meyner brought Herche to Washington as her press aide and set out to hold a very Republican seat. In 1976, with Gerald Ford carrying the thirteen district by 18 percentage points (59%-41%), Meyner eked out a 51%-49% win for a second term against Republican Bill Schluter, who had lost his State Senate seat three years earlier in the Watergate landslide. 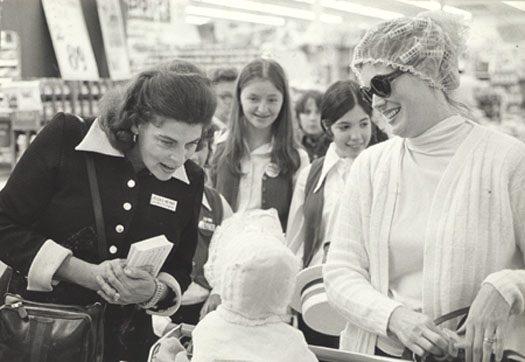