FREEHOLD – The vote stands at 694 provisional ballots for Amy Mallet and 476 for John Curley – not including hand counts – with the countfor Manalapan ongoing and Marlboro and Long Branch left to go.

That puts the Fair Haven candidate for Monmouth County Freeholder in a position to win the election, as Long Branch is heavily Democratic and Mallet scored well in Manalapan and Marlboro in the regular vote count.

Prior to the provisionals process, Mallet led Curley by 18 votes overall: 135,688 to 135,670, in this county of 53 towns. If Malletdefeats Curley,county control of this longtime Republican stronghold will favor the Democrats by 3-2.

Now on the tattered, unresolved edge of the Nov. 4th election, operatives from both parties sit with two Board of Elections reps from each party and a representative from the state attorneygeneral's officeat a long table. They allpour town by town over the provisional ballots.

In this fluorescent back room at the Board of Elections Office, GOP Attorney Brian Nelson commands the Republican side of the table, while Mike Mangan, of the Monmouth County Democratic Party, sits nearby.

Huddled in a corner of the room are GOP operative Mark Duffy and former state Sen. John Bennett (R-Monmouth). Duffy walks over to Nelson and the two men confer as the bipartisan Board of Elections assesses each ballot.

Should it be thrown out? Kept in? Is it legit? Not legit? Agree? Disagree?

He told the press back at the beginning of this process nearly two weeks ago that the Democrats’ strength is provisionals, and that’s borne out by the process so far as Mangan’s candidate Mallet leads her GOP rival Curley of Middletown by over 200 provisional ballot votes.

Mallet is close or tied with Curley in heavily Republican towns like Rumson and Wall.

By the looks of it, there will soon be numbers coming out of Freehold – in time for a challenge if Curley wants to issue one before tomorrow afternoon’s deadline.

"We lost by only 14 votes in Middletown,"Mangan saysof the provisional ballot count instate Sen. Joseph Kyrillos' (R-Monmouth) hometown, where the GOP repelled Democrats in municipal elections two weeks ago.

Then the rivals are back inside at the table as the super reads another round of voter names out of Manalapan. 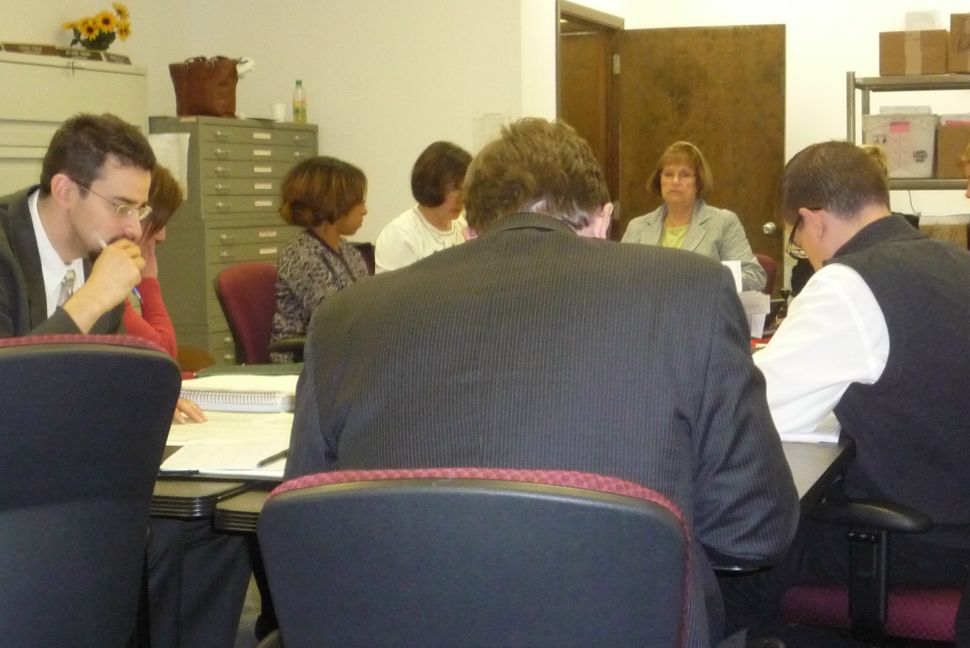