Former State Police Captain Jim McSorley said today that he’s been asked whether he’s interested in running for a District 14 assembly seat, but that he’s very unlikely to do it.

“My DNA is in law enforcement. There have been a few people that have approached me to do it, but I doubt it very much to tell you the truth,” he said.

McSorley just wrapped up an unsuccessful run for Mercer County Sheriff. Although he ran an active and spirited campaign, he was crushed by incumbent Kevin Larkin, 63% to 37%.

“I’d be pretty pompous, after having just lost an election only nine days ago, to think along those lines,” he said.

McSorley hit his target number, which was 50,000 votes, but he said that was “pretty naïve,” because he was “blindsided by Senator Obama’s tsunami.” In all, 141,726 votes were cast in his race.

McSorley, who resigned from a staff position in U.S. Rep. Chris Smith’s (R-Hamilton) office to run for sheriff, said that he plans to either pursue work in the security consulting business or teach full-time at a college.

“But I’d like to stay in law enforcement and quite frankly I’m not sure I’m closing the door to three years from now,” he said. 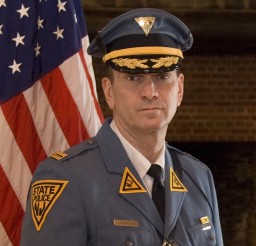