A New Jersey pension fund run by one of Barack Obama’s earliest and biggest campaign fundraisers/bundlers has lost $25 billion — including $9 billion in October, according to a report issued today by a state panel. The New Jersey Investment Council, chaired by hedge fund manager Orin Kramer, says that the value of the state pension fund has shrunk from $82 billion in July to $57 billion.

Kramer, 63, a former White House aide in the Carter administration and a partner at Boston Provident, was named to head the state retirement benefits panel by then-Gov. James E. McGreevey in 2003. The state Division of Investment is one of the ten largest public fund managers in the U.S., with a market value at of $70.7 billion as of the end of September, according to the Treasury Department website. The fund provides retirement benefits for more than 700,000 current and future retirees.

State Sen. Bill Baroni (R-Hamilton), who represents the district with the largest number of state employees, called it a "historic breakdown" in the state pension system.

Less than three weeks ago, Kramer pushed the investment council to add $94 million in pension funds to their $450 million stake in the BlackRock Inc. Kramer said the hedge fund needed to protect cash reserves to avud selling part o their holdings.

BlackRock told employees in an internal memo on Monday that the firm would cut jobs to improve profitibility. The fund's profits for the third quarter dropped 15%.

After the election, Kramer told the Philadelphia Inquirer that Obama should consider Gov. Jon Corzine for Secretary of the Treasury. There's probably no elected official in the country remotely in Jon Corzine's league in understanding financial markets,” said Kramer, who was the first to suggest that Corzine enter politics as a U.S. Senate candidate nine years ago.

On Monday, State Sen. Joseph Pennacchio (R-Montville) asked Kramer’s council to explain why it approved a $178 million pension fund investment in Lehman Brothers even after learning that the firm had lost more than $115 million in the previous quarter.

"New Jersey's State Investment Council and Division of Investment have provided no details on how they came to approve an investment in Lehman Brothers that lost more than $115 million in less than four months,” said Pennacchio, a conservative who sought the GOP nomination for U.S. Senate earlier this year. “State officials were asked to explain why they put state money at such risk at a time when most investors were shunning Lehman. Their non-response was that the state couldn't comment because of the possibility of litigation. Yet months later, the state hasn't told the public if or when it will file a lawsuit against this Wall Street investment bank.” 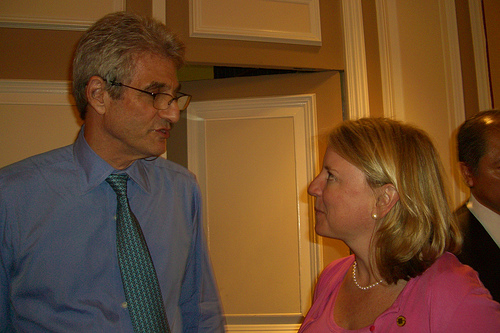