NEWARK – Among Newark elected officials, the election of Barack Obama last week sparked hope for healthcare reform, more federal aid, a re-invigorated sense of American leadership – and a special place on the president’s to-do list for the Brick City.

Inevitably, the Democratic victory also opened up questions about the future of Mayor Cory Booker, a supporter of Obama’s from the beginning of his campaign, who now serves on the president-elect’s transition team as it relates specifically to urban affairs.

As mayor of one of New Jersey’s biggest and one of America’s oldest cities with a battered infrastructure, Booker will join over 20 other New Jersey mayors in Newark on Wednesday for a conference to redefine urban needs for the new administration.

“The history of inner cities being neglected under this past Republican administration will change with Obama,” said Assemblyman Albert Coutinho (D-Newark). “Certainly, there are a lot of expectations for him.

“We need the benefit of roads and sewer lines,” the assemblyman added. “We have a lot of deferred projects. Here in the United States, the federal government is spending two percent on infrastructure compared to five to seven percent that is spent in Europe.”

North Ward Councilman Anibal Ramos said violent crime in Newark has decreased in the last two years, but the city could use more federal resources to help local efforts.

“I am very hopeful that an Obama presidency will generate a greater level of support,” said Ramos. “We were blessed during the Clinton years to receive the benefit of the COPS program, and we could use similar support once again.”

Ramos, a veteran of the School Board, said he would also like to see Congress change No Child Left Behind (NCLB) to better meet the needs of urban student populations.

“I think, in general, because he’s from Chicago, Obama understands the needs of a big city,” Ramos added. “He fundamentally understands issues relating to crime and economic development.”

“We are poised here to take advantage of green jobs, to replace the jobs that left Newark 30 to 40 years ago,” said Rice. “We’re looking at creating those kinds of jobs that are good for low-entry workers who can feed their families while working and pursuing higher education, jobs that will bring structure back to our cities and that can’t be outsourced.”

Additionally, the president-elect provides a good example of someone who did not get bogged down and cocooned for years on end in one office. He stayed on the move, and it paid off, in the assemblywoman’s judgment.

“Obama was cognizant of his capacity to effect change in each of the offices he held – before that ability became stagnant,” Spencer said. “Politicians need to be mindful of that. Just as an example, I think you could say (former Newark Mayor) Sharpe James stayed in office one term too long. It’s very sad. He accomplished a great deal and he would have been a great cheerleader for Obama in New Jersey, but it’s a lesson about staying in one place longer than you should.”

That begs the question about James’s successor, Booker, and whether the mayor would jump at the opportunity to serve in an Obama administration as, for example, director of Housing and Urban Development (HUD).

Booker says he’s stuck “like a Texas tick in Newark,” and to a person, his Newark and Essex County colleagues say he’s committed to running for a second term as mayor – now with the added boost of a personal relationship with Obama.

“I believe Cory Booker is committed to being mayor and will probably run for governor in 2013,” the assemblyman said. “If vacancies open up in the U.S. Senate, that could change his plans. But short of a vacancy, he’ll run for another term.”

Of course, Booker took a loss last week – the latest in a series of local losses – when his candidate for Central Ward Council went down on Election Day at the hands of James ally, former Councilman Charles Bell.

Spencer and Rice both said the fact that Booker’s 11th hour endorsement almost turned the election in Eddie Osborne’s favor against Bell shows Booker’s not anemic in the Central Ward.

“Charlie Bell is a well-loved fixture in Newark politics,” said Rice. “The mayor came out and endorsed Eddie (two weeks) before the election, and he almost won the election. Charlie Bell grabbed hold of the movement of change. The so-called old guard understands change is coming. They’ll be part of making that happen. Having Bell on board only helps the council initiative.&#8
221;

Two potential challengers to Booker in 2010 are attorney Clifford Minor from the South Ward and Ramos, who comes out of the powerful North Ward Democratic Organization.

Recovering at the end of a grueling campaign from which he emerged triumphant, Bell the veteran Newarker said Obama’s victory must be taken as an end in itself.

“I don’t expect any miracles,” said Bell as he heads back to the council.

“I’m a realist,” he added. “Obama ran one hell of a campaign. Now the job begins. The problems this country faces right now economically and internationally, frankly, I wouldn’t wish his job on my worst enemy. The fact that he was able to do what he was able to do is reason enough for celebration for me.”

On Tuesday, Bell nursed wounds from the negative campaigning he said the Osborne campaign, and, by extension, Booker’s people, waged in the Central Ward.

“The negative campaign they ran against me affected my family,” said Bell, referring to signs that said “Bell equals corruption and waste.”

“I would like to say I could look beyond it, but it’s very difficult,” added the councilman-elect. “I feel obligated to respond to the negative campaign. That’s my dignity.” 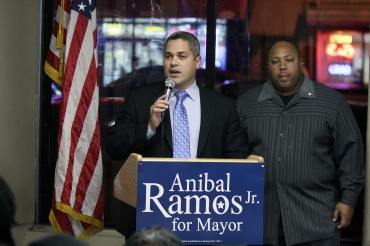