“Soon we will have a new spokesperson leading our RNC. It is imperative that New Jersey Republicans waste no time in following suit,” he said in a press release this morning. “Our recent overwhelming losses reinforce the urgent need to change leadership and create a new direction with a purpose and direction for our party.”

Pennacchio, a dentist by trade, has been publicly critical of his party’s leadership ever since they refused to back his U.S. senate bid, instead running through a series of potential choices before settling on Goya heir Andy Unanue and ultimately former Rep. Dick Zimmer. Pennacchio has publicly seethed about the perceived slight, giving up his delegate spot at the Republican National Convention because he didn’t want to “party with the party leaders” who he felt pushed him aside. But up to this point, Pennacchio has kept his criticism vague, refusing to single anyone out by name.

"One can argue that Mr. Wilson has put forth his best effort. I disagree. Regardless, it is not efforts but results that we must hold our State Chairman to,” said Pennacchio “Continued losses over his tenure and lack of a unified message of purpose and direction leads to the reasonable conclusion that immediate leadership change is warranted and necessary."

Pennacchio sounded a familiar but unrealized theme in Republican circles in recent years: expanding the party’s appeal beyond middle and upper-class white voters.

"Of particular disappointment is the failure of our party's chairman to recognize the importance of reaching out and expanding our party's diversity. Mr. Wilson's cavalier answer to a press observation of our lack of diversity at our recent National Republican Convention, 'Our hardcore party activist are predominately middle class white New Jersey', showed a lack of understanding to one of our party's core problems,” said Pennacchio. “The statement went against the efforts of many of us including past Governors Kean and Whitman, who sought a broader tent and a more inclusive Republican Party. The statement showed a political indifference or worse, a Republican elitism, an unfortunate perception which many both in and out of our party believe.”

Wilson is up for reelection to his chairmanship post in June, just after the gubernatorial and assembly primary election. In a phone interview, Pennacchio said that he will not seek Wilson’s post, but he does have some people in mind who he will support for it.

“I already have by soapbox. I’m a state Senator. But as much as I’m a state senator, I’m a party leader and would like to see change and I’m not embarrassed about saying so," said Pennacchio in a phone interview. 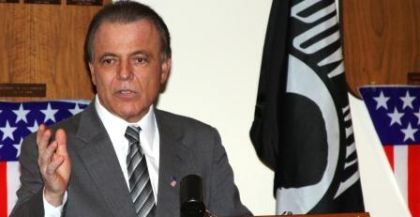