Worth noting are the comments of Stuart Rothenberg, the editor and publisher of The Rothenberg Political Report, a non-partisan political newsletter covering U.S. House, Senate and gubernatorial campaigns, Presidential politics and political developments, on the race for Congress in New Jersey's fifth district between Democrat Dennis Shulman and U.S. Rep. Scott Garrett (R-Wantage):

"(Dennis) Shulman, a blind rabbi and psychologist, acted as if articles about him and his candidacy in Time magazine and the New Yorker, as well as an endorsement from the mayor of New York City, made him a celebrity and a serious threat to incumbent Republican Rep. Scott Garrett. They didn’t. Most people in his district don’t read those magazines or care what Michael Bloomberg thinks. Garrett’s district strongly leans Republican, and Bush won it with 57 percent in 2004, running more than 11 points ahead of his statewide total. Credible Republican statewide candidates always carry the district even if they are getting pounded statewide. Despite all the self-generated hype and over-the-top campaign rhetoric, Shulman drew 42 percent against Garrett — almost 2 points worse than Paul Aronsohn (D) did two years earlier and only 1,300 votes more than 2004 Democratic nominee Anne Wolfe did." 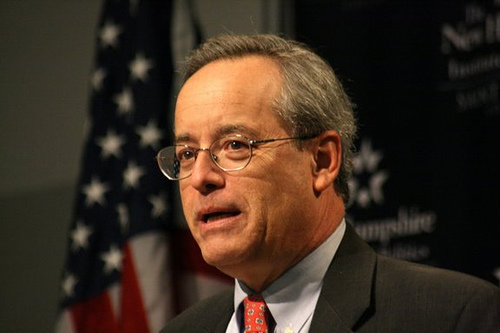