One campaign certain to get underway soon is the race for U.S. Marshal, a post that will flip from Republican to Democrat next year. James Plousis, a former Cape May County Sheriff who was named U.S. Marshal by George W. Bush in 2002, is expected to follow tradition and offer his resignation effective with the start of Barack Obama's presidency on January 20, 2009. Plousis' predecessor was Glen Cunningham, who was a former Jersey City Police Officer and City Councilman before Bill Clinton named him in 1996. New Jersey's two United States Senators, Frank Lautenberg and Bob Menendez, will effectively pick the next federal marshal.

One Democratic leader close to the senior U.S. Senator suggests that Lautenberg's choice could be Mitchell Sklar, his former Legislative Assistant who is now the Executive Director of the New Jersey Association of Chiefs of Police. Lautenberg is also backing Paul Fishman, a former Justice Department official in the Clinton administration, for U.S. Attorney. Menendez has not reportedly not yet focused on this particular position.

Cunningam was the only African American to serve as New Jersey's U.S. Marshal. All his predecessors where white men.

While the shot list has not yet developed, expect several names to come off quickly: Democratic insiders say it won't be Atantic County Sheriff James McGettigan, who lost his bid for re-election to a sixth term last week and needs a job. And it is not likely to be Bergen County Sheriff Leo McGuire, whose ties to indicted Democratic County Chairman Joseph Ferriero won't help his chances (and besides, he wants to run for County Executive in 2010 when Democrats dump Dennis McNerney).

Passaic County Sheriff Gerald Speziale may be interested, according to Democratic sources, but he's not likely to be the choice of Lautenberg or Menendez. 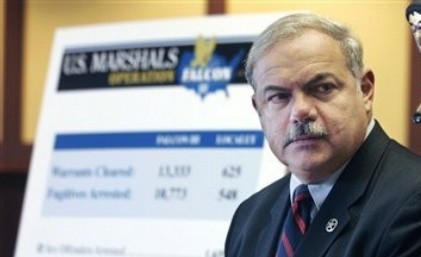