When State Democratic Chairman Joseph Cryan focused his players in the middle of the Obama presidential campaign, he told them to get ready for a long game, a two-year operation, in fact.

Despite all temptation to treat Obama’s victory like the ultimate end-zone rush and champagne romp, Election Night on Nov. 4th should be handled more the way a geared-up squad treats a 15-point lead in their favor in the locker room come half-time.

Everyone’s first job was to elect Sen. Barack Obama (D-Il.) president. In comfortably accomplishing that, the campaign made up of 45 field organizers coordinated over a million volunteer calls, pounded on 750,000 door knocks, and built a volunteer base of more than 10,000 bodies.

Now their second job is to get back on the field and re-elect Gov. Jon Corzine, whose Meet the Press appearance on Obama’s behalf, and regular Morning Joe cameos must now be chalked up to high- profile statewide second act prep work rather than Secretary of Treasury auditioning.

If Corzine seeks office again and wins, it would be the first time a Democratic governor nailed re-election since Brendan Byrne in 1977.

His frontline soldiers are banking on thousands of new registered Democratic voters infused with Obama fever, and know their big challenge is to keep a structure intact and polished for the 2009 general election.

In part, that means sustaining enthusiasm for the incumbent governor, whose spreading-the-money around style of politics runs counter to what the party built on during the Obama cycle.

Michael Muller knows something about the particular mission at hand.

A 17-year veteran of campaign nuts and bolts, he directed the statewide Nov. 4th coordinated effort for the Democrats.

That involved coordination on several levels, the creation of a machine the party wants to keep rolling through next year’s statewide election.

Lacking cash from the national campaign, and using Obama’s new Democrats to voluntarily man the turrets of the old Democratic Party machine, Cryan blended a team that included the likes of coffee house Obama organizer Julie Diaz working out of Princeton headquarters under the direction of Carpenters Union machine veteran Tricia Mueller, who ran the statewide Obama campaign.

“What we were looking at with Obama was bringing his grassroots people into the traditional structures that already existed,” Muller said. “We wanted to channel their energy into a working model, while also making sure they continued to do some of the things they had already been doing. We strove to create one holistic and defined universe.”

Part of what Muller did was make sure new voters coming out for Obama stayed activated all the way down the ballot and punched in for U.S. Rep-elect John Adler (D-Camden), and Assemblywoman Linda Stender (D-Fanwood), who lost her 7th District congressional bid.

“The success of Obama down the ticket was built on the coordinated infrastructure designing a micro targeted GOTV universe to define demographic based targets of sporadic voters that likely would vote for other candidates on a congressional or county level,” said Muller. “Plus we ran the paid canvass and phone field effort along with GOTV in the targeted congressionals for Adler and Stender as a special project of the DSC. …We established a ground network across New Jersey to help bring Obama volunteers together with traditional Democratic field efforts which allowed for the coattail effect to take hold.”

Adler worked with an advantage over Stender on some key fronts. Not insignificantly, the state senator was one of the first elected officials in New Jersey to endorse Obama for president in the lead-up to the Democratic Primary.

That was a fact the coordinated campaign used in targeted phone calls to 6,000 newly registered voters in Willingboro, for example.

Then there was message, with Adler echoing Obama’s “Change you can believe in” sound bite in his ads, and drumming the bad economy mantra in the face of his Republican opponent’s insistence that the fundamentals of the economy were sound: a ground level mirror of Obama’s and John McCain’s horn lock at the presidential level.

“We have a candidate who is mortally wounded because he is functionally illiterate on the economy,” a top-flight GOP operative at the time moaned of McCain. Meanwhile, the message-disciplined Adler kept pace with Obama.

From an operations standpoint, Stender was more problematic.

The Democratic Congressional Campaign Committee came in with its cookie cutter model and managed a mishmash
micro-targeting effort, according to one Democratic Party operative.

“Four-four voters were getting robo calls in the middle of the summertime telling them to vote for Stender because she was a woman,” said the source. “They were going to be voting for Stender anyway. Why were they getting targeted?”

Admitted Muller, “There was a big difference between the campaigns in districts three and seven. Adler built a strong volunteer universe, while Stender became too reliant on paid workers.”

For months, Perr had told anyone who would listen that his freeholder candidates had a chance to win against Freeholder Director Aubrey Fenton and his running mate, Freeholder Stacy Jordan.

He turned out to be right.

Down-ballot working parts of the Obama-Adler campaign mechanics, Perr’s candidates humbled the opposing GOP county chairman, who on the day after the election explained that the riverside city GOTV effort by Democrats simply swamped his freeholders.

With the out-of-the-box Adler campaign as a model in a traditionally non-Democratic area, coupled with high octane urban organization, the Democrats want to move the whole effort forward to catapult Corzine over whatever Republican opposes him next year.

Skeptics say the Nov. 4th results represent a head fake when it comes to the re-election chances of this governor, who was trading bonds on Wall Street when Obama was community organizing on Chicago’s mean streets, and who now nurses a three-year tenure in hard-bitten economic times in which a “change-time” candidate won the presidency.

But as they return to the field, Muller and Cryan see only sustaining a dominating offense. 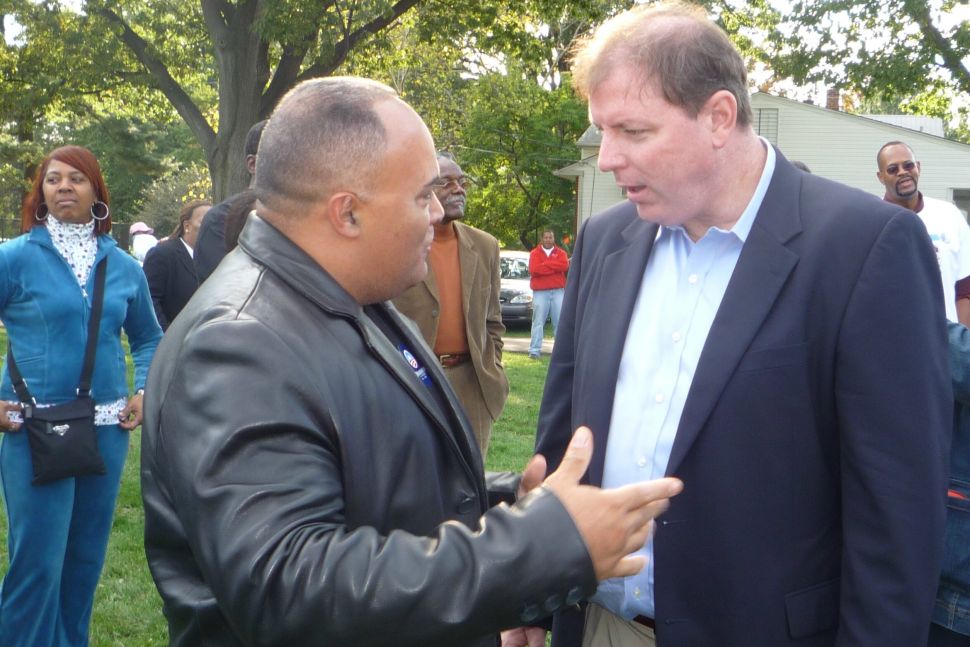