Keasbey came from an old New Jersey political family: his great-grandfather represented Salem and Cumberland counties in the colonial General Assembly from 1763 to 1769, and his grandfather was an Assemblyamn from Salem County from 1798 to 1801. Lincoln reappointed Keasby to a second term as U.S. Attorney in 1865, but did not sign the necessary paperwork before his assasination. For a time, there was a question as to his status before Andrew Johnson agreed to reappoint him. In those days, U.S. Attorneys were part-time public officials, and Keasbey maintained a private law practice as well. 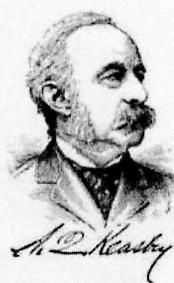