Although they represent different parts of the state, County Executive Joseph DiVincenzo and state Sen. Majority Leader Stephen Sweeney with a few exceptions – the sales tax fight two years ago comes to mind – usually end up on the same side.

This time, however, it’s not looking as though the two men are going to get eyeball to eyeball on the state pension deferral, which Sweeney opposes and DiVincenzo supports.

It’s one of those moments when two politicians whose careers have run along parallel lines suddenly veer into each other’s path and create an unmistakable flashpoint.

DiVincenzo desperately wants the legislature to sign off on Gov. Jon Corzine’s brainchild bill enabling counties, municipalities, and school boards during an economic downturn to defer their state pension payments by 50 percent over a three-year period, which would total $1.3 billion.

The executive anticipates that his county’s annual payment to the state pension system will reach $28 million in 2009, an increase of $6.5 million over last year, and calls the pension deferral proposal “an important element to balancing the County’s 2009 preliminary budget” to avoid additional deep cuts.

Sweeney fundamentally disagrees, arguing that the credit card mentality cultivated during the administration of Gov. Christie Todd Whitman in part led the state to its current financial crisis.

The senate majority leader made headlines last week when he voted against releasing the pensiondeferral bill from the budget committee.

“We haven’t done anything to correct the real costs of government, so we’re putting off the inevitable by not paying our bills today,” said Sweeney. “The workers aren’t getting a pension holiday. They’re still paying into the state pension system.”

So why shouldn’t government entities? he wonders.

The bill passed in committee over Sweeney’s objection but yesterday Democrats couldn’t salvage the same-party support they needed to introduce it on the floor of the Senate against full-force Republican opposition. The political terrain prompted Senate President Richard Codey (D-Essex) to chart a new course for the legislation, which he hopes to revisit in January.

Convening a Newark press conference with county executives Thomas DeGise of Hudson County and Dennis McNerny of Bergen at the same time Codey and his Statehouse allies realized they would have to delay consideration of the pension holiday, DiVincenzo called on Sweeney and others to back the bill.

“We’ve got Republicans making it a political thing and our Democrats are playing right into their hands,” DiVincenzo told PolitickerNJ.com. “We have to cut $14 million if this doesn’t get approved. Everyone who’s running around out there saying this is what (former Gov. Christie Todd) Whitman did, doesn’t know what he’s talking about. This isn’t Whitman. Here, we’re paying 50, 80, and then 100 percent back, year by year over a three-year time span. Whitman was five years of no funding with a tax cut for the wealthy. This is a no brainer.

Sweeney sympathizes, and right up front makes it clear how much he likes and respects DiVincenzo.

Certainly they have much in common.

They’re Democrats, of course, who assess the field from similar vantage points, having both been groomed in county government – DiVincenzo in Essex and Sweeney in Gloucester.

DiVincenzo served as freeholder director in his home county before winning his first term as executive in 2002.

In addition to winning the 3rd District senate seat the same year DiVincenzo became county executive, Sweeney continues to be the top dog on the Gloucester County Freeholder Board.

Both men enjoy cozy relations with South Jersey party boss George Norcross, who gave his political blessing in dollars and campaign infrastructure to Sweeney when Sweeney took down Raymond Zane in his state Senate race and played a crucial role in the South Jersey Democrats’ long march in the region to eradicate Republicans from positions of power.

Moreover, DiVincenzo and Sweeney are two Democratic Party elected officials who are among those friendliest with state Sen. Kevin O’Toole (R-Essex), that Republican caucus member most aggressively pursuing the overthrow of Codey.

Alert to the Norcross-Adubato symbiosis and its closeness to O’Toole and O’Toole’s sway in the Republican Party, the senate president fights locally where he can to contain Adubato’s power, and statewide to contain Norcross.

While the formidable shadows of Norcross and Adubato loom large over both Sweeney and DiVincenzo, both men have gutted their way up within their organizations to become the elected alpha males in their separate but convergent South and North Jersey political spheres.

It’s no surprise that as chief of his respective domain, each by now also believes that he has abilities uniquely suited for the governor’s office.

Indeed, both men are on record saying that if Gov. Jon Corzine decides not to pursue another term in office, they’d seriously consider running. They also both make it clear that they’re big Corzine fans, not always a popular viewpoint in the roil of grumbling old school Jersey Democrats who don’t mind letting slip an off the record razor word in the direction of the private sector-schooled Corzine.

“I’m behind Corzine 1,000 percent,” said Sweeney, in what was certainly an unintended echo of McGovern’s statement of support for running mate Tom Eagleton just before McGovern managed to disentangle himself from Eagleton.

Unlike some politicians who don’t amplify their endorsements for the governor, Sweeney specifically praises Corzine for wading into tough budget decisions others avoided. He notes with some consternation that not annually and fully funding the state pension fund frankly runs counter to “everything the governor’s been doing.”

DiVincenzo’s the same way when it comes to the governor.

“I’m with Corzine,” he said repeatedly two weeks ago at a special party retirement party he threw for former U.S. Attorney Chris Christie, the likely Republican nominee for governor.

Codey, likewise, won’t challenge Corzine. But like Sweeney and DiVincenzo, if Corzine weren’t already suited up and on the field with the threat of his considerable cash stronghold present in any campaign he runs, Codey the former governor probably wouldn’t have to be tempted to go statewide.

In this case, it’s Codey and DiVincenzo who are standing with Corzine, and Sweeney who’s arguing against a key Corzine proposal.

DiVincenzo rolls out the numbersto make his case for the governor’s pension deferral – or "holiday," as critics call it.

“Essex began its budget process in the fall of 2008 and was faced with a $105 million deficit that was caused by $72 million in increased operating costs and $33 million of revenue shortfalls that are a direct result of the faltering economy,” his office said in a statement. “Working with Department and Division Directors, Constitutional Officers and County-affiliated agencies, the budget deficit was reduced to $53 million by cutting operating expenses and developing new revenue sources. This was still not sufficient, so on Thursday, December 11th, DiVincenzo announced a plan to eliminate about 150 positions, which included laying off 119 full-time and seasonal employees and not filling 41 vacant positions. Other cost-cutting measures included eliminating travel reimbursement and expanding an existing hiring freeze to include no new hirings and promotions for 2009. In addition, the Executive is recommending to hold the line on salaries for 2009 and 2010 and to have union represented employees pay a portion of their medical benefits and prescriptions.”

Sweeney said he knows he’s from a more rural county – population 300,000 compared to over 800,000 for the politically more complicated Essex. But the economic downturn hits everyone statewide and it’s not over, he said.

“I run a county government too, and in fairness I get more aid, I have the money to pay,” he said. “Look, Joe’s a dear friend. But there’s subprime wave coming it’s going to be worse than it is now. The subprimes will be bad for a few years. What happens when you get to 2012 and you can’t pay? Joe’s done good job of managing his government county, I know that. People should know that I haven’t called one legislator and asked them to oppose this bill. I haven’t twisted their arms. I just can’t support it. I can’t.”

A primary battle for governor next year between the state senator from Gloucester and the Essex executive will likely have to wait or may never happen. And the same can be said about a three-way match between them and Codey.But in the meantime, a tough, as yet unresolved issue has brought forth both DiVincenzo and Sweeney to make a case for why he believes he’s in the right, each pitted against the other. 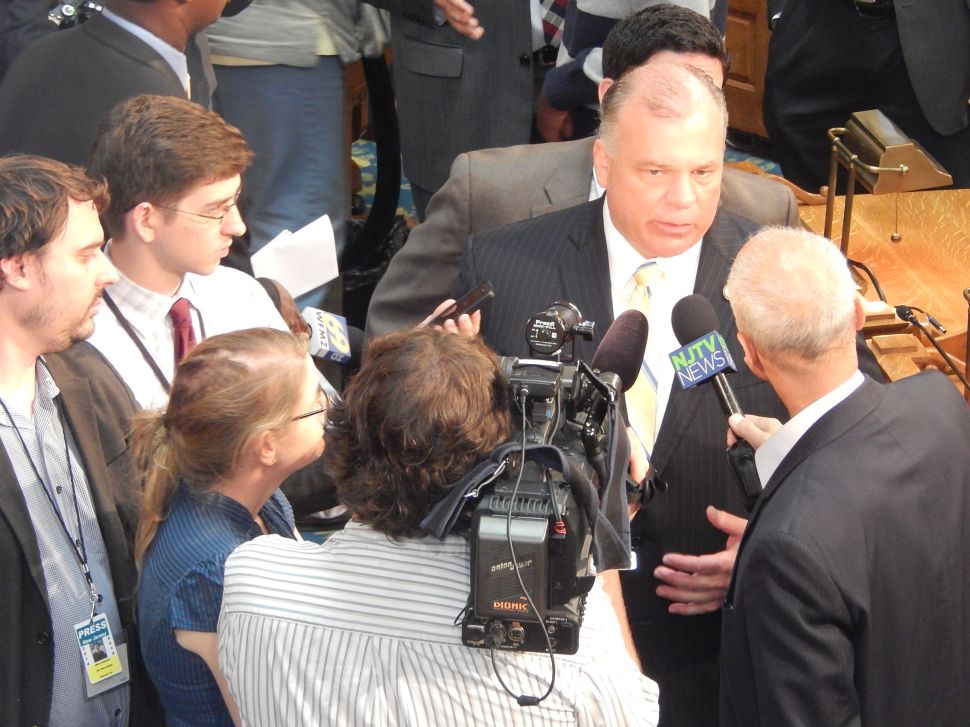