Assemblyman Vince Polistina (R-Egg Harbor Township) anticipates that he and his District 2 running mate, Assemblyman John Amodeo (R-Margate), will be targets in the coming legislative elections.

But he dismisses any hopes the Democrats had of prying the GOP apart by using the old Democratic Party/Fran Bodine tactic: subbing a Republican in under the guise of the opposition party banner.

Both in his district and statewide in a gubernatorial election year, he doesn’t think the Republican label is road kill here.

Far from it, he insists.

“In the presidential election, around the nation, voters were looking for change,” Polistina said.

They’re also looking for change in New Jersey, he says.

“No one looking at the situation rationally could admit that Gov. Jon Corzine hasn’t been an unmitigated disaster,” said the freshman assemblyman, who on Wednesday evening attended a Steve Lonegan tax talk at the Ducktown Tavern in Atlantic City organized by the Atlantic City Republican Club.

Polistina won’t yet back a gubernatorial candidate publicly. But he sees in Corzine a weak incumbent.

“This is a governor who wants to borrow a billion dollars for transportation and does not want to make the principal payments until 2023,” he said.

Polistina argues that the GOP next year would be able to make an issue out of the Democrats’ initial decision to create a 2.5 percent commercial development tax to create money for affordable housing.

“It looks like Whelan, Lesniak and Van Drew are realizing what I knew for six months,” Polistina said of Democrats’ reconsideration this month of the state’s latest Council on Affordable Housing (COAH) measures.

“The Democrats’ economic policies will stifle economic growth in this state,” he added. 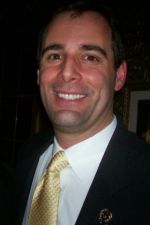