BOONTON – In an Elks Club room jammed with elected officials wearing goodwill game faces for their high country candidate, municipal attorney Tony Bucco, Jr. of Boonton Township this evening formally kicked off his run for an Assembly seat in the 25th Legislative District.

Calling his foray into politics an “obvious next step,” the 46-year old son of state Sen. Anthony Bucco (R-Morris) highlighted his work and public service record, including 28 years on the Boonton Volunteer Fire Department, where he has risen to the rank of captain.

“I want to continue to serve my neighbors,” said Bucco, surrounded by his wife and family at a podium heaped with canned and boxed goods he collected from friends and supporters to distribute to local food pantries during the holiday season.

“New Jersey has been living beyond its means for too long and we’re now $31 billion in debt,” Bucco told the crowd. “We have the worst business tax climate in the country. Gov. Corzine and the Democratic administration have failed all of us by simply being reactive to the fiscal crisis.”

He criticized a state schools funding formula that does not serve children, in his view, while saddling seniors and families with egregious property taxes.

“I promise to provide solutions for cutting the state debt,” said Bucco, who was introduced by his co-campaign chairs Clerk Joan Bramhall and Sheriff Ed Rochford.

The sheriff took his own shot at Democrats in the Bucco buildup.

“I don’t know if the problems in Trenton are as bad as they are in Illinois tonight,” said Rochford, a playful, laugh and boo-inducing nod to the apparent ethical meltdown of Illinois Gov. Rod Blagojevich, whom the fedsarrested this morning on corruption charges.

“But there’s no one better to lead us through the problems of Trenton than (Tony) Bucco,” Rochford added.

Among his closest backers at the head of the room stood the candidate’s father, born and raised in Boonton, and himself a son of Buccos going back in this town to the 19th Century – a businessman who owns a glue company in Newark and came up in local politics, first as an alderman then mayor, assemblyman, and senator.

He didn’t address the crowd out of respect for his son, but later stepped outside the packed hall to answer questions.

“I’m very proud of him,” said the elder Bucco. “He had called me when I was in Italy around Labor Day to let me know he intended to run. I asked him if he was sure that’s wanted he wanted to do, and I told him it’s going to be a lot of work.

“He’s worked on every one of my campaigns,” the senator added. “But it’s a little different when you’re the candidate. It’s a lot more work. But from what I’ve seen so far, he’s worked hard at it.”

As the crowd dispersed, they paid their respects to the man who’s served in some kind of public capacity here going back to the 1980s.

“There are people in Boonton who still call me mayor,” said Bucco.

To a lazy eye, it looks like an old West mountain town that was bulldozed eastward – across the country – and finally fork-lifted into the buttressing lowland rubble of New Jersey. But for its share of fussy coffee shops, Greek Revivalist architecture, squint-and-you-can-see-it view of Manhattan and share of diehard Jersey pizza parlors, it might as well be Ketchum, Idaho, what with all the black bear lore and storybook train station straight out of “Have Gun, will Travel” and hillsladen with iron ore.

Not inappropriately, Boonton, or more specifically the neighboring Boonton Township, provides a western-style setting for this showdown between Bucco, Jr., and Freeholder Douglas Cabana, who’s the brother of Bucco, Jr.’s wife and who intends to kickoff his own campaign for the same seat early next month.

The patriarch played down the intra-family rivalry.

“They all had Thanksgiving together and there weren’t any knives thrown at one another,” said the elder Bucco. “Doug has the ability to run for the Assembly if he wants to run. In Morris County, we have an open primary. There’s no party boss who selects who’s going to be on the party line."

The young Bucco’s considerable political connections and his work for over 20 years as a municipal attorney both contributed to his being able to muster the backing of some 175 Morris County elected officials, he said.

People in the audience affirmed as much.

“I’m backing him in part because he’s done an outstanding job as our municipal attorney,” said Roxbury Mayor Jim Rilee. “You know, he gets criticized because he’s not been an elected official and now he’s running for the Assembly, but he has a lot of firsthand experience of the impact of state government on our towns.”

In another corner of the same room, Mayor Joseph Nametko said Bucco’s also proved a very successful attorney in his town of Netcong.

“He’s been the borough attorney in Netcong ever since he got out of law school,” said Nametko. “He’s a well-rounded guy, very, very sociable, who’s saved us a lot of times from going down roads we shouldn’t have gone down. If Tony doesn’t know something, he’s on the phone right away.”

“Tony called me when he said he was going to run and I told him I’d have no problem supporting him,” Ford said. “Young Tony was with a law firm that represented our town. Many people who run don’t have that kind of experience.”

Ford wants Trenton off his and Boonton’s back. Bring up the Department of Environmental Protection (DEP) and he gives a don’t-get-me-started look.

“I saw the Highlands resolution and it’s that big,” fumed Ford, approximating the width of a phone book with thumb and forefinger. “I have a few friends who are attorneys who can’t get through it. Now, how can you expect us to work with something like that when the state putting that kind of demand on us can’t even balance the budget?”

“What I learned about politics from my father is you have to listen and you have to be accessible,” said the Assembly candidate. “You can’t just draw a line in the sand. You must articulate your position and be persuasive, but you almost must compromise sometimes. You must be willing to listen.”

A bearded man with a camera flashed a smile after taking a photograph in the packed room.

Talk to political insiders in Morris County and most of them say this 25th District primary fight for two seats will remain strictly a duel between Cabana and Bucco for the seat emptied by retiring Assemblyman Richard Merkt (R-Mendham). But the ideologically right-wing Carroll tonight appeared to be covering himself – in case it turns into at least a three-way dogfight.

“Just observing,” he grinned before paying his respects to the elder Bucco and melting into the crowd.

Tony Bucco said he’s not out to challenge Carroll – or to prove a point to Cabana.

“This is about me and it’s about what I can bring to the 25th District,” he said. “It’s about all this food, look at this. I called the food pantries and told them I’d bring them a couple of boxes. We have far more than that. 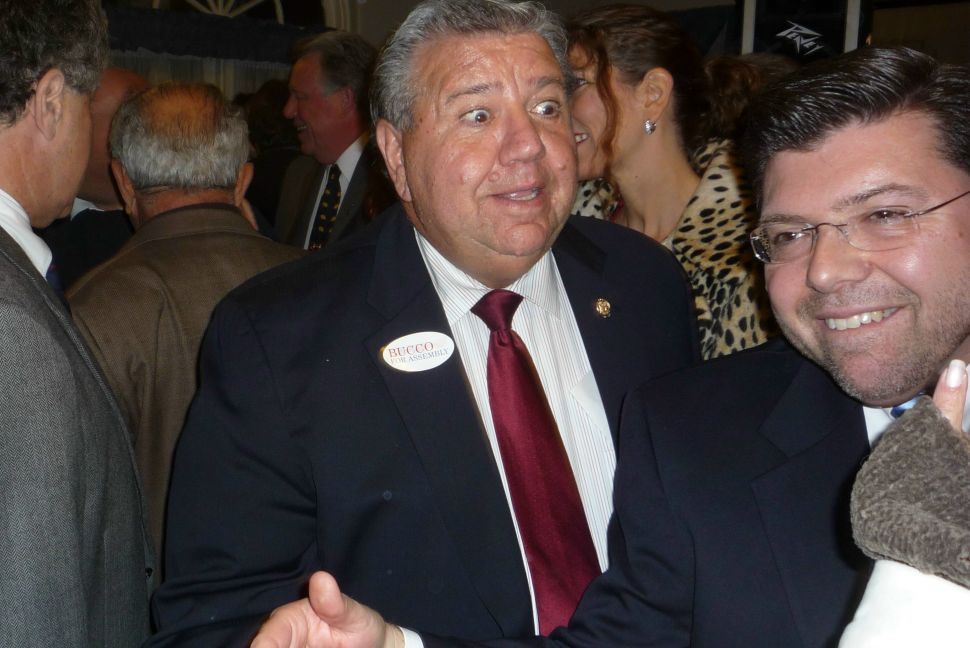