“I will be running next year,” said Calabrese, 33. “I’ve taken a little time in the last month or so just to collect my thoughts for the next election.”

Calabrese, who lives in Upper Saddle River and owns a real estate business in Rutherford, was the top Republican vote getter in an election year when the GOP capitalized on Democratic Chairman Joe Ferriero’s legal troubles to come closer to winning a seat on the all-Democratic board than in the last several election cycles. Despite having Barack Obama at the top of the ticket, Calabrese only came 8,423 votes short of incumbent Democrat David Ganz – a difference of about two percentage points.

Calabrese already appears to have the support of crucial members of the beleaguered party’s leadership structure to run again. But before he runs for the party’s nomination, he’s circulating a petition to create a ballot question that if passed would cut the county’s open space program – which Calabrese believes has been abused — by $10 million.

Although he still lost despite a period of horrible press for local Democrats, Calabrese said he wasn’t discouraged.

“My first time running was a great learning experience. I can’t believe what kind of economic state we’re in Bergen County. We have a lot of debt on our books and the amount of spending going on is really overwhelming,” he said.

Calabrese’s former running mate, Paul Duggan, said that after two unsuccessful runs in a row, he does not plan to run again.

“I have decided that on the county level, I’m going to hand over the torch now to Chris and a suitable running mate,” he said. “You don’t go in there three times in a row.”

Duggan said that he has grown frustrated with coming within striking distance of Democrats but being unable to overcome huge Democratic pluralities in towns like Teanack, Hackensack, Fairview, Englewood, Cliffside Park and Fort Lee.

“There has been a policy of people giving up on what they call the badlands. I refuse to do that. I would like to see fresh blood come in,” he said.

One county-wide Republican candidate did win, however: County Clerk Kathe Donovan, a holdover from the days of Republican domination who's been able to continually buck the county's Democratic trend. She was the top vote-getter of the county candidates, with about 700 more votes than incumbent Freeholder Bernadette McPherson.

The Republican candidates will likely face off against incumbent Democrats Julie O’Brien and Vernon Walton. 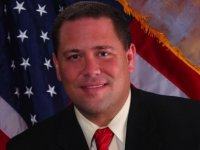