PASSAIC – The campaign season never ends in Passaic, or at least it feels that way as newly elected Mayor Alex Blanco will likely have to face at least two challengers he already vanquished in the November special election to succeed the disgraced Sammy Rivera.

Both city supervisor/School Board President Vincent Capuana and real estate developer Jose Sandoval show no signs of loosening the reins on their respective campaigns.

Next year the contest will be for a full, four year term.It was in the spirit then of ongoing rivalry that Blanco’s people wondered why Capuana never filed a final 2008 report with the New Jersey Law Enforcement Commission (ELEC).

Today, Capuana’s campaign treasurer said he would submit the information by tomorrow – at the latest.

“We were a little behind,” admitted Joe Billy, referring to the Nov. 28th deadline. “We’ve had a lot of activity and we had to confirm a lot of addresses and telephone numbers.”

“We ended the day with $1,500 and we have an additional outstanding liability for Mr. Capuana in the amount of $5,000,” the treasurer said. 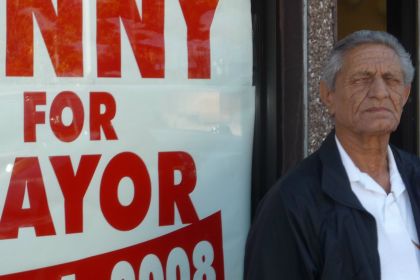