Biotech Republican millionaire John Crowley of Princeton will not run for governor in 2009, according to his spokesman, Bill Spadea.

“What happened in the last few weeks is speculation that has gone beyond reality,” said Spadea. “It is certainly an honor for John to be considered a top-tier candidate but he does not intend to run at this time. Both John and myself will be focused on Buildingthe New Majority (a grassroots organization Crowley and Spadea founded) and working to elect local and Assembly candidates in 2009.”

Crowley almost ran for the Republican nomination for the U.S. Senate earlier this year, even fielding a phone call from U.S. Sen. John McCain (R-Ariz.) to get in the race, but he decided against it, citing the demands of his biotech business in Cranbury.

Over the summer, Crowley and Spadea formed Building the New Majority and stepped up their outreach to party members, an effort that for Crowley included playing the host of a Mississippi boat ride at the Republican National Convention.

Spadea said all along that Crowley’s goal was to build the party – not promote himself as a statewide candidate.

“We’re so jaded in this state that people assume the minute you want to do something good, you’re going to turn this into a campaign,” said Spadea, who reiterated that his friend’s decision was in no way based on the plans of former U.S. Attorney Chris Christie, whom most Republicans believe will enter the race for governor in the next couple of weeks.

“John’s decision was made independent of any potential opponent, and that includes Chris Christie, Steve Lonegan or Rick Merkt,” Spadea said. “This is truly a case of speculation going beyond reality.

Crowley would not make an endorsement for governor at this time.

Son of a cop who died in the line of duty, and a U.S. Naval Reserve officer who founded his own business to find a cure for two of his children who suffer from Pompe Disease, the would-be Republican candidate created excitement in both the U.S. Senate cycle and in the lead-up to the gubernatorial primary.

In addition to having money, he is the subject of a CBS film – to begin shooting in the spring with the involvement of Harrison Ford – which is scheduled for an October, 2009 general release date in movie theaters. Spadea admitted the movie might have created a well-timed backdrop for a gubernatorial run by Crowley.

Crowley may indeed run statewide in the future, but his spokesman would not say for which office – or if Crowley even has a preference.

“The speculation about John running for U.S. Senate created speculation at the national level,” he said. “But what happened with the governor’s race, and people’s interest in seeing John get in it was more organic.

“I don’t know that there’s an answer to that question (about whether Crowley would prefer to run for Senate or governor),” Spadea added. “Where he has a passion is to serve the people around him – his family, his community, his country… John is not sitting back making political calculations. It is what it is. When the Republican nominee for president calls you, it’s hard not to think about it.”

Spadea said he and Crowley would continue to organize. Sometime in January or February they intend to launch a second, issues-oriented organization to better define a pro-private sector, jobs-creating message to complement their initial cause of Republican candidate recruitment. 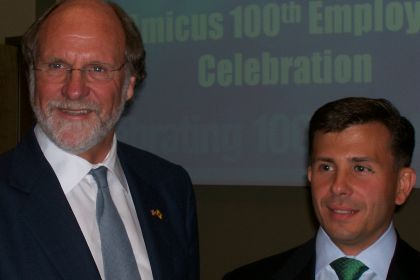