EDISON – His town’s paved over compared to some of the more quaint rural reaches of the Garden State, but Mayor Jun Choi of Edison never had the luxury of acting like a politician who can stand on an unbreakable political foundation.

He’s running for re-election next year, and this one will be no give-me for the first-term mayor who ran as an underdog the first time and despite the advantage he enjoys as an incumbent, can probably still claim the underdog brand as he squares off against a regenerated opposition.

There are three council members up for re-election in 2009, and they are all prospective mayoral candidates: Council President Robert Diehl, Councilwoman Antonia Ricigliano, and Councilman Anthony Massaro.

If it sounds like an easy divide and conquer opportunity for an incumbent with especially good name ID and blue collar celebrity status whose change-time election three years ago made the national magazine circuit, it’s actually not.

In point of fact, it’s going to be a hard slog for Choi.

The once fibrous strands of Ricigliano and Massaro plan to forge an alliance. They’re going to run a poll, and whoever has the best chance of beating Choi will challenge him in the Democratic Primary with the support of the other.

“In general, we don’t feel as if we’re being well represented,” said Ricigliano, who has the backing of Bill Stephens, the independent candidate Choi beat by 250 votes in the 2005 general election.

“It’s most disappointing,” added Ricigliano, a onetime Choi backer. “If we can’t understand that people are really hurting, that things are so drastic financially, then something has to change now. The mayor does not seem able to acknowledge that there are financial urgencies.”

“It’s going to be one candidate and one candidate only,” confirmed Massaro, an 11-year veteran who ran on the Choi ticket in 2005 after Choi beat establishment incumbent Mayor George Spadoro in the Democratic Primary.

“Mayor Choi won two elections (his own, and a subsequent election in which he fielded council candidates) with 40 percent while we fight over 60 percent, and we’ve told each other we can’t let that happen again,” said Massaro, a retired school principal who already has his slogan picked out if he runs: “It’s time for commonsense to make a comeback.”

“It’s going to be Toni or Tony,” he laughed.

Choi’s people insist the mayor attempted to get in on some of the talks. But frankly he won’t accept a compromise unless there’s evidence of real change.

His opponents laugh at the notion as applied to the Choi administration.

They say it was bad enough when the new mayor and his allies came in giving them the pigs at the trough treatment, as if the older set were wallowing in corruption. They felt a little self-conscious. A little chastised.

But then Choi the campaigning do-gooder started showing his own strong strains of old school.

Now few politiciansappreciate pious reformers who behave as if the business of local government is beneath them, and after running as a new generation guy, Choi’s perceived Frank Hague at full throttle act galled his enemies.

He hired out-of-towners for key administrative jobs. He gave them cars. He gave himself a raise. Of course, that made a lot of local headlines. He went from $49,000 to $75,000 with benefits. He hired a communications director at $60,000. He submitted a request to raise the director’s salary to over $90,000. He asked for new furniture – a nearly $500,000 expenditure.

He also cut the local payroll by 80 employees. But what he calls hold-the-line efficiencies with the police and fire budgets, his opponents decry as departmental demolitions.

No matter, says Choi, who anticipates the attack coming in ads next year. He’s making battle preparations, and he’s confident.

“We introduced a budget with an increase less than the rate of inflation, and I have brought in quality people to fix problems,” he said. “They ask why the mayor received a 50 percent increase in salary. My answer is we now have a full-time mayor exclusively dedicated to solving Edison’s problems. By the way, I’m the lowest paid mayor among the mayors in the top ten towns in the state.”

He acknowledges that a cadre of City Hall diehards and gadfly allies are bound to be unhappy.

The question is whether their unhappiness can produce a lasting and productive political alliance in opposition to the ma
yor in the 2009 Democratic Primary election.

Before Choi built himself into the grassroots force that upended the Edison political establishment, the party was already split between the City Hall-entrenched forces of Mayor George Spadoro and the political guerillas of Stephens.

Choi took down both outfits.

After party committee leaders told him it wasn’t his time in 2005, he beat a past-his-prime Spadoro for the support of the Democratic Party. Now Spadoro’s done politically, say his friends; and one of the former mayor’s ticket mates going back to 1997, Massaro sees himself as the party’s best chance to beat Choi.

“This mayor does not believe in inclusiveness,” he said. “I’m a retired school principal. I’m used to working with all kinds of people – different superintendents. When it comes to this mayor, I don’t know if we’ve exchanged as much as a hello since we were elected. He’s extremely eloquent, but it’s all platitudes. He demands obedience. I’m sorry, but I'm too old for that.”

But Stephens – who left the party to challenge Choi as an independent and lost in the 2005 general election – also wants another crack at Choi.

Only this time, he doesn’t want to run. That’s why he supports his longtime ally Ricigliano as the candidate.

“To me, local government should be run as you run your household,” said Ricigliano, mother of nine children who live in town or in the area, and wife of a retired factory worker. “My thought is whatever you have to do, take care of it immediately. The way you run a family is the way you run government.”

She proved an aggressive and effective combatant of the Wal-Mart project. She and Choi agreed on that issue at least, but through the years she has won a reputation as an outspoken independent.

“I’m a Democrat but you could never call me a follower,” said the deeply rooted Ricigliano. “We’ve been in our home 45 years now. We bought the vacant lot and the chopped trees down by hand. I don’t think they had electric saws back then.”

“I think Massaro tries to be too much of a diplomat and is not enough of a leader,” he said. “I really think Ricigliano – who’s won on and off the line – has a shot at being truly competitive against him.”

It remains to be seen if Council President Diehl – another Democrat in a town where Dems outnumber Republicans 4-1 – joins the Ricigliano-Massaro alliance or runs as a foil on Choi’s behalf.

Or just runs on his own.

“Diehl’s really a long-shot, I know he would like the job, but I don’t think he can muster the support,” said Stephens.

Still, if he gets in the primary, Diehl presence could play havoc with Stephens’ and Ricigliano’s plans and potentially give Choi the leg-up he needs.

As usual, Edison’s Democratic Party Chairman Thomas Paterniti, a former state senator, says he’s staying out of the fray. He’s no Choi fan. Maybe it has something to do with the fact that Choi ran against Paterniti to try to become chair of the party. The mayor lost. But they’ve never reconciled.

Paterniti makes it a point to say he welcomes Choi to screen before the Democratic Committee in late April.

“Everyone has a right to screen,” said the party chairman. “People talking about me controlling things behind the scenes don’t know what they’re talking about. I don’t even have a vote. This is all up to the county committee people. And you know how that works? The committee people tell you they love you and then they do whatever they want. We’ve been doing it this way since 1994. You never know who has the votes. I’m not a boss. There’s no bossism in Edison.”

But sources say given the alliance-building among the older Edison political set, Choi won’t even bother screening before the committee.

He’s more likely to run off the organization line in the primary – the same way he did when he won in 2005. And he’s likely to walk into the ping pong ball ballot position drawing with his own committee candidates – 156 of them, or two in each of the town’s 78 districts.

Middlesex sources say South Brunswick Councilwoman Carroll Barrett is well-positioned to get the county committee’s nod to run on the party line in place of the late Freeholder Director David Crabiel, who died two weeks ago.

Paterniti wants his son-in-law, former Edison Councilman Charles Tomaro, to replace Crabiel. But the county party is reluctant to pick a freeholder candidate who can’t secure the backing of the mayor. In one more sign of the strain between Paterniti and Choi, Choi won’t support Tomaro for freeholder. Rather than reward a divided town with a freeholder, county party members at a Jan. 4th screening will probably give the ballot nod to Barrett, who will run with the incumbents.

Meanwhile, Choi will field his own slate of freeholder candidates and a

long with his local committee candidates, stand up his own army.

His opponents finally think they have him cornered, but besides the Diehl question mark; the question of whether plans for a Massaro-Ricigliano alliance can withstand the pressures of hurt feelings once one outpolls the other; the obvious demonstration of Choi’s own political skills and his access to non-traditional money sources; and his arguments that his polling shows Edison moving in the right direction, there remainsone big X factor for the mayor.

It's all the organizing he’s done in the course of the last few years – including his aggressive ground-level work on behalf of President-elect Barack Obama.

While the old guard was banging the Hillary Clinton gong, Choi was among the early elected officials in New Jersey who backed Obama and went all out for him, and now the young mayor, seasoned by the demands of a tough town in a tough economy, with more established forces aligned against him, will see if he can make the case for change and re-election – at the same time. 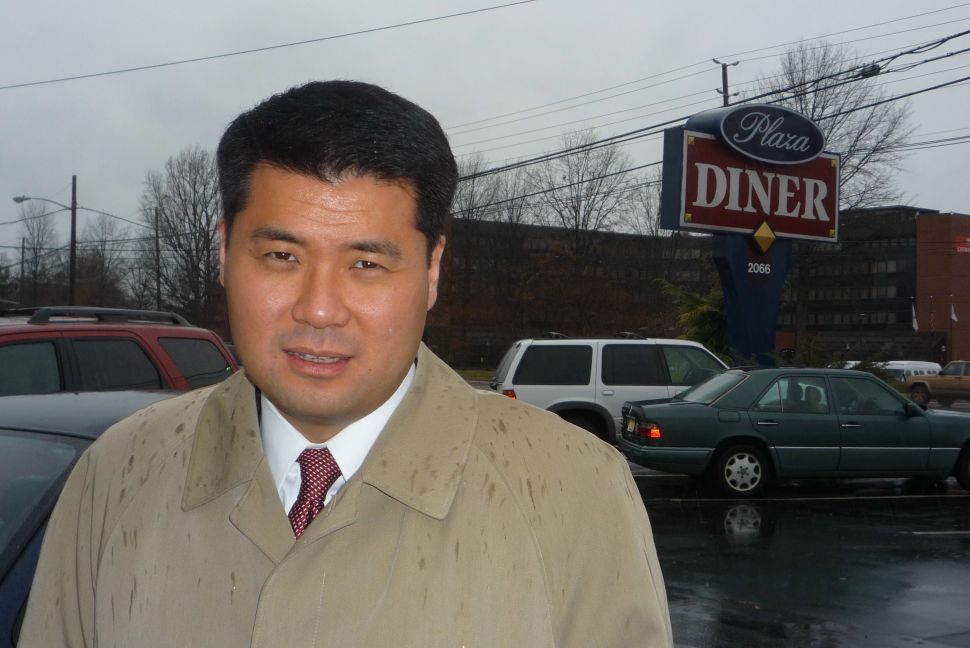