Jersey City Councilman Steve Fulop’s announcement that he will not run for mayor breathes new life into a race that has been dormant for months.

Since summer, the field of prospective candidates has remained in stasis, with state Sen. Sandra B. Cunningham’s pending decision on whether or not to run holding up former Assemblyman Lou Manzo’s own candidacy. Former Mayor Bret Schundler has said that he’s going to run, but has yet to make a formal announcement, while Assemblyman L. Harvey Smith has yet to make a decision. Downtown community activist Dan Levin is running as well.

Fulop said that the lack of campaign activity only benefited incumbent Mayor Jerramiah Healy, who he frequently butts heads with.

“It’s to the benefit of the Jersey City residents that it’s going to start the campaign. It has kind of been not moving forward, which doesn’t benefit the dialogue – probably just Jerry Healy,” said Fulop.

Now, the flood gates are set to open. Fulop, 31, expects that Manzo and Schundler are the two candidates most likely to benefit from his decision – Schundler because he shares the same base of well-to-do downtown residents as Fulop, and Manzo because the issues he chose to champion as a legislator in Trenton appeal to that same base. Both, he said, will likely start trying to pick off his supporters.

“It will probably help Schundler in the fundraising. I’m sure they’ll both get on the phone and see who they can pick off, and try to keep this ship as much together as possible,” Fulop said.

Fulop said that his decision was not based on any political deals, and that he will talk to all of the prospective mayoral candidates before he decides who he will support. Nor did fundraising play much of a role in his decision, Fulop said. His next ELEC report will show somewhere between $250,000 and $260,000 on hand – more than the other potential candidates so far, though only a quarter of Healy’s war chest. Fulop, a stock trader, acknowledges that he’s taken a personal financial hit.

“For me I just realized it wasn’t the right time for me in my career,” said Fulop, 31.

An at-large seat could raise the young councilman’s profile city-wide, which could position him for a future mayoral run. But it would also be harder to win than his current seat. That, however, is complicated by Shelley Skinner, a community activist and close Fulop ally who has already announced her intention to run in Ward E – regardless of whether or not Fulop does.

Fulop won’t speculate on whether he’s interested in running four years from now. But he’s convinced that he’ll still have options. 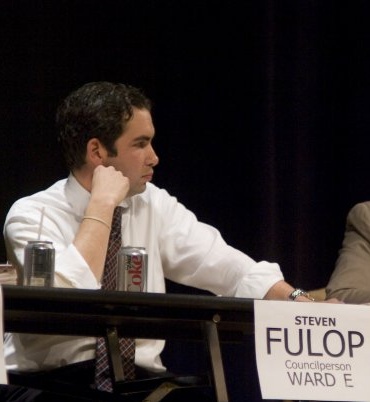