Leonard Lance offered a lesson in New Jersey political history during his farewell address to the State Senate on Monday – but unfortunately got one of his facts wrong. Lance spoke of his first memory of the Senate, going to Trenton in 1956, at age three and a half, when his father was the Senator from Hunterdon County and watching some Senators like Wayne Dumont (the Senate President), Frank "Hap" Farley and Mark Anton. While Lance's knowledge is always impressive, he got one thing wrong: Anton wasn't in the Senate in 1956; he lost re-election two months earlier.

Anton, the Chairman of the Suburban Propane Gas Corporation, was a half-term Republican from Essex County who was elected in a 1953 special election after Alfred Clapp, who had mounted an unsuccessful campaign for the GOP gubernatorial election, resigned to become a Superior Court Judge. An Essex County Freeholder, he was never a strong vote-getter: he defeated Democrat Charles Stanziale, a former Chief Assistant U.S. Attorney, by a narrow 50.4%-49.6% margin.

When Anton sought a full term in 1955, he found himself in a feud with former U.S. Attorney William Tompkins, a former Assemblyman from Essex County who was at the time serving as the Assistant U.S. Attorney General. Anton and Tompkins were both interested in seeking the Republican nomination for Governor in 1957.

Tompkins, who considered challenging Anton himself (he ran for the Senate ten years later but lost to a Democratic slate headed by John Giblin), instead recruited Assembly Majority Leader William Barnes to run. Barnes, who had run a strong race against U.S. Rep. Hugh Addonizio in 1952, attacked Anton for his support of night harness racing and his membership on a citizens committee formed to end a high profile strike on the New York pier, but lost the primary to Anton, 53%-47%.

Unable to unite the Essex GOP in the general election, Anton lost to Democrat Donal Fox. Fox, a former Assistant Essex County Prosecutor who had managed the nearly successful U.S. Senate campaign of Charles Howell in 1954 (Howell, a Democratic Congressman from Mercer County, lost the open Senate seat to Republican Clifford Case by an excruciatingly close 48.7%-48.5% margin), became the first Democrat to win the Essex Senate seat since 1908. Fox beat Anton 53%-48% and took office on the day Lance described as his first memory of visiting the Senate chamber.

Seeking re-election to as second term in 1959, Fox found himself in the middle of a battle between Governor Robert Meyner and Dennis Carey, the legendary Essex County Democratic Chairman over the new Essex County Prosecutor. The post was vacant because Charles Webb had resigned to launch his own State Senate campaign against Fox.

Meyner wanted to appoint his 34-year-old Executive Secretary, Brendan Byrne, as the Essex County Prosecutor, but Carey wanted Thomas Holleran, who had won 45% of the vote a few months earlier for an open congressional seat. (Holleran lost to Republican George Wallhauser for the seat of Robert Kean, who left Congress after twenty years to run for the U.S. Senate.) Fox was close to Meyner, but unwilling to cross Carey in an election year. He blocked Byrne's nomination at Carey's request. Meyner eventually had his state Attorney General name Byrne as the Acting Prosecutor until he could work out a deal with Fox. (Joseph Lordi, who later became Prosecutor, was named Deputy Attorney General at the time so he could become Byrne's first assistant.)

During his re-election campaign, Fox would up splitting with Carey anyway and backed Byrne's nomination in the Senate. Despite the split, Fox was able to win re-election – in part because the Essex Republicans were even more sharply divided. Split into two factions, the Essex GOP could not agree on a Senate candidate to challenge Fox. Clapp left the bench to run and defeated Webb in the Republican primary. In an attempt to unite the party, Kean, the former Congressman who had lost the '58 Senate race to Harrison Williams, won election as Essex County Republican Chairman – viewed in those days as Kean's successful bid for higher office.

Under Kean's leadership, Essex Republicans made Carey's bossism a campaign issue. The GOP won seven of twelve Essex Assembly seats and regained control of the Board of Freeholders, but Fox was able to get re-elected over Clapp, a close Kean ally, 53%-47%.

Fox threatened to run against Carey for County Chairman, but eventually made peace with the party boss – albeit for a short time. With Meyner term-limited, Fox set his sights on the 1961 Democratic nomination for Governor. Carey gave Fox the organization line in Essex, but then withdrew it when other party leaders settled on Superior Court Judge Richard Hughes as their candidate.

Later that year, Fox used senatorial courtesy to block Carey's appointment to the Passaic Valley Sewerage Commission. And in a bid to oust Carey as County Chairman in June, Fox formed an alliance with Newark Mayor Leo Carlin. Their candidate, John Egan, the son of William Egan, who was Carey's predecessor as Chairman, lost. With Carey's help, Addonizio ousted Carlin in the 1962 mayoral election.

Fox's political career came to an end in 1963 when Carey denied him the organization line in his bid for a third term. He resigned from the Senate later that year when Hughes appointed him to the New York Harbor Waterfront Commission. Democrats lost the Essex Senate seat that November when Robert Sarcone, a Republican Assemblyman, defeated Assembly Speaker (and future lobbyist) Elmer Matthews. That race could be the only time in state history when three incumbent Assemblymen competed in the same general election for the Senate: Democrat George Richardson, an African American legislator from Newark, ran as an Independent.

Carey remained as County Chairman until his retirement in 1968. He was succeeded by a key lieutenant, Harry Lerner. 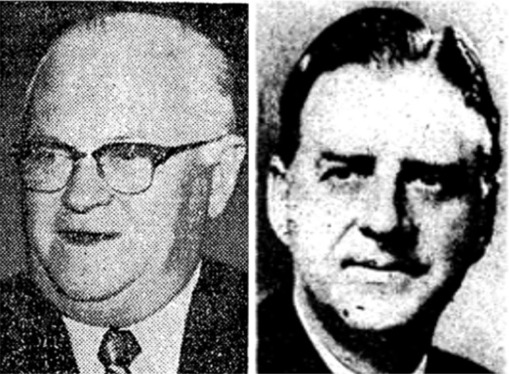