PLAINFIELD – Get it right in four years or you’re gone.

That’s the message the voters consistently deliver in the Union County city of Plainfield, and looking at past results, most of their elected leaders get it wrong.

In 125 years of political wrangling, only one mayor won reelection here.

That was the late Al McWilliams, a self-professed New Democrat who in 2005 failed to get over a rising crime wave and lost his bid for a third term to machine Democrat Sharon Robinson-Briggs by 325 votes, 2,713 to 2,388.

Now Robinson-Briggs, 49, Plainfield’s first woman to serve as mayor, readies for her reelection campaign next year in what will likely be a hard fought Plainfield contest with once and future councilman Adrian Mapp, a McWilliams ally and now leader of the New Democrats, who’s energized by his successful return to local politics.

Mapp already filed to run for mayor – a $35,000-per year part-time job – with the state’s Election Law Enforcement Commission (ELEC), but insists he’s not yet made a final decision.

“If more and more people approach me I will consider running,” says the 52-year old former county freeholder and at-large city councilman, who earlier this year defeated Robinson-Briggs ally Don Davis by a 10 percent margin to become the 3rd Ward councilman.

“If there’s a groundswell of support for me, I would give it very serious consideration. I would be guided by the desires of the people.”

Should he run, Mapp, a CPA and chief financial officer in Roselle, is likely to make competence the issue as Plainfield’s nearly 48,000 residents this year lost Muhlenberg Hospital – the city’s biggest employer of 1,000 jobs; while homeowners fear the prospect of a local tax increase of 9.5 percent.

“The roads are in a state of disrepair, people are paying high taxes, and we have a shrinking commercial tax base,” says Mapp. “Residents don’t feel their tax dollars are offering a return on investment. They want to know their elected officials are capable of leading. Clearly, the city needs someone to get out front.”

In defense of her administration, Robinson-Briggs says the 9.5 percent figure reflects on a working $78 million budget that has not yet received state extraordinary aid. She continues to examine every option in difficult economic times, she says, including renegotiating contracts and implementing a four-day work week for city employees.

As for the hospital, Robinson-Briggs with pain in her voice argues that she did everything she could to avert what was ultimately a private sector decision made by the suits at Solaris Health Systems.

Her administration lobbied the hospital itself, and failing that, “We sent an overabundance of letters to Gov. Corzine,” says the mayor. “We proposed a statewide lottery with money to be divided among (urban) hospitals (like Muhlenberg). That was an idea that didn’t pan out. We started to work on the issue at the end of last year. We wrote over 2,000 letters. I understand the governor is in a tight spot and looking at things equitably in the State of New Jersey.

“But I told them, if you close the hospital, people will die.”

While the mayor refrains from listing her accomplishments days before her New Year state of the city speech, observers of Robinson-Briggs’ administration say positives during her four-year watch include crime reduction, fewer workers on the city payroll than when she took office, and construction of a senior citizen complex on Front Street for under $1 million.

People like her. What she lacks comparatively in schooling, she makes up for as a ceremonial force whose positive energy fills a room.

“The mayor is very warm can and can connect with people in an emotional way,” says At-Large Councilman Rashid Burney. “Adrian Mapp’s base is more affluent and educated.”

“No, Adrian’s not Bill Clinton,” admits 2nd Ward Councilman Cory Storch. “But he’s really good with constituent relations. I saw that when he first served on the council. Then there’s his financial background. He’s going to run on fiscal management and delivering overall quality of services.”

If the mayor’s poise and interpersonal skills – “Let me give you a Plainfield hug,” she tells a newcomer – and Mapp’s numbers-crunching prowess jump out as arguably the political antagonists’ most obvious strengths, both the councilman-elect and Robinson-Briggs also have important allies on their respective sides who underscore the city’s political divide between the regular Dems and the New Dems.

Robinson-Briggs boasts the political muscle of Assemblyman Jerry Green (D-Plainfield), speaker pro tempore in the state legislature, who championed her early in her career on the school board and who has ready access to Democratic Party campaign cash. Green’s own PAC dropped $8,200 on Shannon-Briggs’ massive $200,000 campaign effort in 2005, while the assemblyman generated significant campaign contributions from Statehouse allies like Assemblyman John Wisniewski (D-Sayreville) and Assemblywoman Nellie Pou (D-Paterson).

Mapp, meanwhile, enjoys the alliance of the New Democrats’ symbol of polished poetic justice in the person of Annie McWilliams, 24-year old eldest daughter of the late and – in some quarters – beloved – mayor, who died of kidney cancer in April of 2007.

As Mapp’s running mate, the young McWilliams crushed the organization’s at-large candidate in the June primary by a 3-1 margin.

A Wharton School of Business graduate who will serve as the city’s at-large councilwoman when she gets sworn-in with Mapp come January, McWilliams comes out of the ward that contains the Sleepy Hollow neighborhood, Plainfield’s own ivy covered homage to Victorian grandeur. She supports a Mapp mayoral candidacy, and at the very least makes it clear, “I will be disappointed if we see this mayor back in office.”

Coming off their win, the Mapp-McWilliams duo can make a compelling case that the New Democrats have momentum as they consider a citywide contest in Plainfield’s four wards.

Mapp in November seized control of the council seat in the mayor’s home ward, officially dealing her some disrespect in her own neighborhood. In addition to his base support in the 3rd ward, where presumably he would have to fight the mayor house to house for votes, Mapp can count on the old McWilliams support in the 2nd ward, reanimated by his daughter and reinforced by Storch. The 2nd remains the New Democrats’ strongest ward, where Al McWilliams built his own base of operations.

Already in possession of a political structure in Robinson-Briggs’ home ward and anchored in the 2nd by McWilliams, Mapp faces the challenge of reaching out to those two wards where the sitting mayor has an advantage over the New Democrats, the regular Democrats’ bread and butter districts: the 1st and 4th wards.

Predicting the usual political conflagration here next year, politicos like Burney are staying uncommitted for the moment.

“If I pick a side now and that side loses, I’m out,” says the at-large councilman, who ran and won as a New Democrat but has since tried to be more independent, in his words.

“I respect and like Adrian Mapp a lot, as I do the current mayor,” says state Sen. Nicholas Scutari (D-Union). “I will say that any attacks on elected officials regarding the hospital closing are absolutely unfair. From the get-go, market factors made it impossible for the hospital to remain open.

“The two main issues in Plainfield are education and crime,” adds the senator. “It’s no longer an Abbott School district. Crime is reduced. Usually in an economic downturn you see an escalation of crime but that’s not happening.”

“The Queen City,” says native son, Assemblyman Jon Bramnick (R-Westfield), who served on the city council representing the 2nd ward from 1985 to 1991 before he moved to Westfield, the second to last Republican to serve on the council.

On Friday, the city mobilizes to confront a snow and ice storm.

The mayor’s on duty in City Hall.

A fire truck slaps slush in the windshields of oncoming traffic as it heads downtown, through a blur of African hair braiding studios, Mexican restaurants, grocery, private detective and bail bonds stores, tattoo parlors, donut shops, past the Religious Society of Friends- Quakers, they settled the town – under train tracks and past Central Americans in front of diners trying to make eye contact with drivers of passing cars, and public works employees in yellow vests on foot in the falling snow, shoveling.

A gray public building, one of New Jersey’s blue collar pyramids – in this case a post office – emblemizes the older era, when some WPA architect dreamedGreek columns could as appropriately adorn Watchung Avenue as the Parthenon between the liquor stores and a passing beef-pork-poultry truck out of Elizabeth.

It’s been over 40 years since the 1967 Plainfield riots, an era when Mayor George Hetfield conducted city business from the auspices of a local country club and the hard luck 4th Ward went up in flames and a mob killed Officer John Vincent Gleason, Jr.

And Hetfield – guilty or not, those who were there judged – was voted out of office, carrying on the one and done mayoral cycle that Al McWilliams finally broke and that Robinson-Briggs wants to break again.

On the hill overlooking the rest of the city, above the factories and abandoned fa

ctories and projects of the 4th Ward – “There used to be a Mack Truck factory there, a great big factory,” remembers Bramnick – stand the 2nd Ward Wall Street millionaires’ massive summertime mansions of all styles – Colonial Revival and Jacobethan Victorian, Queen Anne’s, Tudor, Second Empire, after a while you can start inventing names that evoke elegance but still not get to the architectural finery that is only, of course, part of the city’s legacy; as Robinson-Briggs and Mapp and McWilliams and Green, and everyone, gets ready for yet another season of politics in Plainfield. 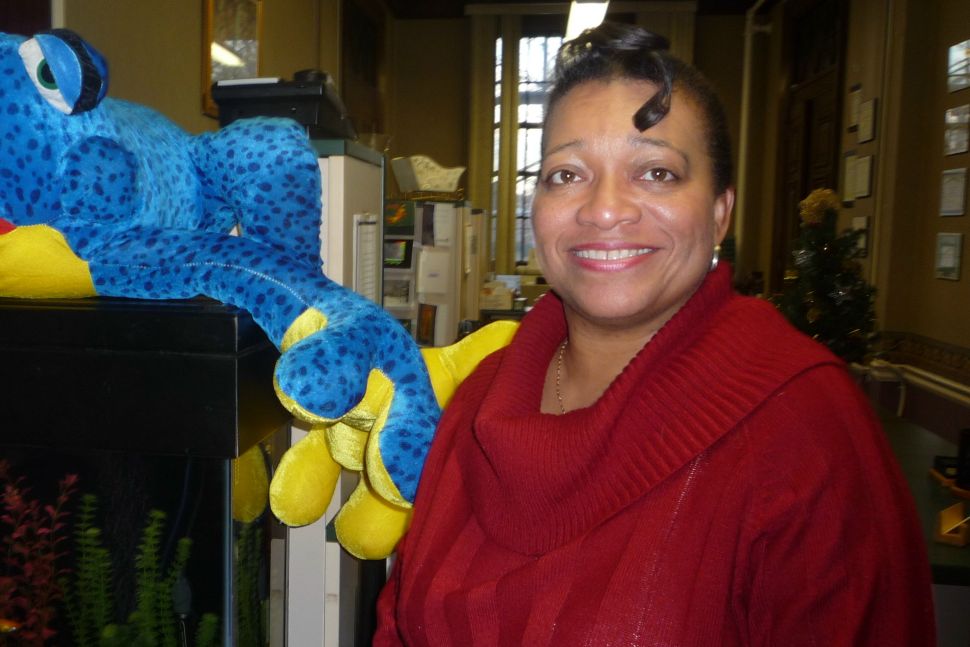