"This should be a great city and I think I can help make it happen," he told the paper.

Smith, the former city council president, served as Acting Mayor for about six months in 2004, after the sudden death of Mayor Glenn Cunningham, and served a few months as a state senator. He lost the following special election to fill the remainder of Cunningham's term.

Smith, who is also an undersheriff, was supported by the by the Hudson County Democratic Organization to run for his assembly seat in 2007 on a slate headed up by Sandra B. Cunningham, the widow of the former mayor. 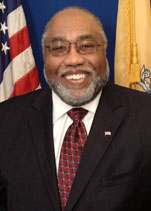