In an otherwise tough year for Republicans, Congressman-elect Leonard Lance (R-Flemington) gave the party a much-needed victory in the Garden State. Now, a year after being ousted from his post as state Senate minority leader, Lance has built up considerable political capital.

Which is good for Hunterdon County Freeholder Director Erik Peterson, a personal friend of Lance’s who’s considering running for the Assembly seat in the 23rd Legislative District.

The Assembly seats must be filled within 35 days of becoming vacant. Right now, Peterson and Warren County Freeholder John DiMaio are the only two candidates on the horizon. But if there are two open seats, observers agree, there are likely to be many more than two candidates.

Peterson has not made his bid official, but said that he is likely to run and will probably announce next month. While Lance has chosen to heed his late father’s advice and not choose his own successor, all signs point to him not only endorsing Peterson, but helping him plot strategy.

Lance is, after all, godfather to Peterson’s son and was best man at his wedding.

The current circumstances in which Peterson hopes to enter the Assembly are also similar to how Lance entered the legislature in 1991. Back then, Dick Zimmer was vacating a state Senate seat to go to the U.S. House. Bill Schluter left his Assembly seat to move up to the Senate, and Lance took over Schluter’s seat.

Lance, for his part, said it’s premature to make anything official about who he is supporting.

“I’m not going to be endorsing an Assembly candidate until we have the election for the state Senate, and I’m neutral in that race,” said Lance. “Having said that, I’m very close to Erik.”

Lance, however, downplayed the influence his own endorsement would hold.

“I would never presume that anything I might say would control the situation,” he said.

“Last year I led the board to cut the county budget, and when I say cut the budget I don’t mean what most people say are cutting. Our 2008 budget was less than our 2007 budget,” he said.

Peterson also said that he would campaign for more transparency in government.

While Peterson waits to pick the right time to announce that he is officially running, Warren County Freeholder John DiMaio, a contractor who used to be mayor of Hackettstown, has already declared his candidacy.

This is DiMaio’s second time running. In 2005, he finished fifth in a crowded Republican primary.

DiMaio said that a Lance endorsement is not necessarily a sure ticket to victory.

“If you look, I have 28 years of experience in small government. Erik is finishing his first term as a freeholder… I certainly have more experience in elected office and I’ve been a businessman for 31 years. I think people look at your background, your experience and what you bring to the table,” he said. “Certainly people will be influenced by endorsements, if there is an endorsement. But I’ve seen newspaper endorsements and people vote totally different. I don’t know if it will have a huge influence but I’m sure it won’t hurt him.”

Like Peterson, DiMaio said that he’s a social and fiscal conservatism. He plans to run his campaign on a theme of cutting state debt and lowering taxes.

If it’s an option, DiMaio said that he would like to bracket with Mike Doherty.

“I am as close to Mike Doherty as anyone can be as far as ideology,” he said. “I’m pro-family. I’ve been a hunter all my life. I grew up in a home with firearms in Warren County. We live a free life out here, and I believe in less government interference.” 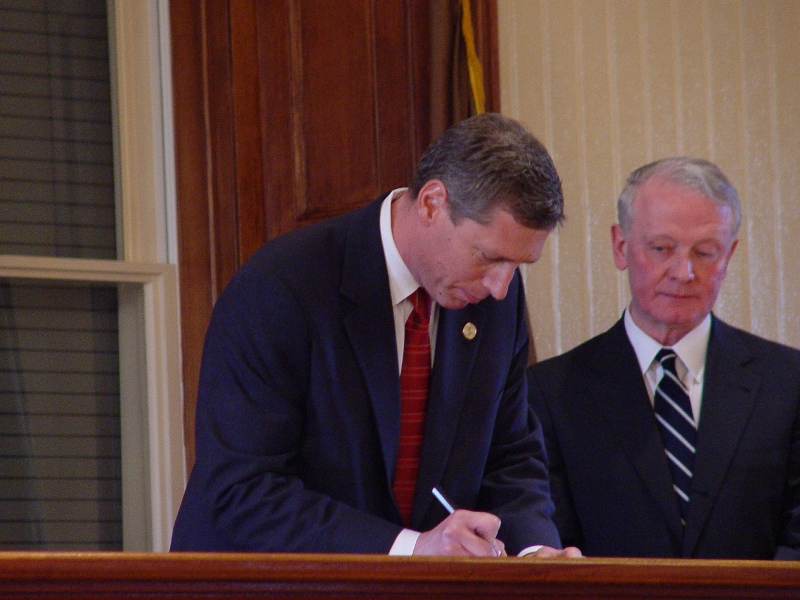