Manzo, 53, has done this four times before, starting in the wake of former Mayor Gerry McCann’s indictment on fraud charges in 1992 — a crowded and brutal race that included his brother, which forced Manzo to air a cable advertisement of his mother calling him “the real Manzo.” He expects to hear references to his four previous losses repeated by his opponents throughout the campaign – especially by Mayor Jerramiah Healy.

Manzo said he doesn’t mind hearing about that. In fact, he believes it testifies to his dogged persistence as a public servant, even when he does not hold a public office. In other words, nobody can call Manzo a quitter.

“Those are the naysayers and those are the spinners. Those are the sound bytes they’ve been handed by the political architects of Healy’s organization,” he said. “Those are the same naysayers that can join the long list of people who criticized Lincoln, Edison and others who understand that you’re never beaten until you quit.”

Manzo’s fifth mayoral run has its origins in his ouster from the state legislature, where he served two terms in the Assembly before waging a losing state senate campaign against mayoral widow Sandra B. Cunningham in 2007.

Defeated but far from knocked out of local politics, Manzo kept the lease on his campaign office and transformed it into a community advocacy center where he kept up his city-wide profile. Earlier this year, the center began running ads promising residents help “where City Hall has failed you.”

Mayor Healy and his allies already have quit, according to Manzo.

“This city needs a fighter. Jerry Healy got hit with crime and taxes and he’s never gotten up. He’s been counted out and the people of this city need a change,” he said.

In a statement released this morning, Manzo referred not so subtly to Mayor Healy’s 2006 disorderly conduct arrest in Bradley Beach, and the arrest of Councilman Steve Lipski — a Healy ally whose own 2004 mayoral campaign distributed anti-Manzo flyers featuring the image of a Klansman – for urinating on a crowd of Washington, DC concertgoers from a balcony.

"The current administration has made Jersey City a laughingstock. Late night talk show hosts make reference to the shenanigans of our office holders,” he said.

Manzo sounded economic doom and gloom for the city, saying he expects the unemployment rate to rise to anywhere between 20 and 25% — close to the national unemployment numbers during the Great Depression.

He thinks that the crime problem can be alleviated through the type of expunging programs he championed as a legislator, and he wants to decrease the size of the city’s public high schools while opening new magnet schools.

As for the controversial practice of issuing tax abatements to developers, Manzo said that he would create a policy “that’s fair to the developers and the residents of our city.”

And as a demonstration of the transparency Manzo claims his administration would have, he planned an unannounced visit to the Jersey Journal this afternoon, where he would let the editorial board have at him.

Manzo said that he will work to court the support of Ward E Councilman Steve Fulop, who despite over a year of speculation announced yesterday that he would run for mayor. He’ll likely have to compete with former Mayor Bret Schundler – who’s also running – for Fulop’s support and influence with the newcomers who populate the city’s gentrified downtown.

“I think Steven Fulop can have a great deal of influence in determining who the next mayor is, should he so choose, and I imagine his phone is ringing off the hook in the last couple days,” said Manzo.

Manzo did not say how much money he’s raised for his campaign yet, but promised to either match Mayor Healy’s $1 million war chest or be the next best-funded candidate. Nor has he cobbled together a full slate yet, though he mentioned some potential council candidates he’s going to talk to, like civic activist Jimmy King, Fulop ally Jimmy Carroll and police officer Sean Connors, a tireless campaigner who Manzo supported for freeholder in the June primary.

‘I’ll have a ticket with people who really need to earn their meddle to get here,” said Manzo.

“Mr. Manzo certainly is entitled to run for mayor, as he has several times in the past,” she said. “Although the people have spoken about his prior candidacies, we still look forward to discussing the issues with not only Mr. Manzo but with all of the candidates for this office.” 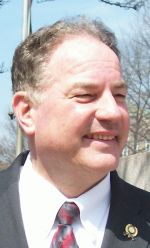