“She helped make her state a leader in fighting global warming and reducing greenhouse gas emissions,” said the president-elect. “She shares my commitment to protecting our air, water and abundant natural resources.”

Jackson, who served as director of the New Jersey Department of Environmental Protection (DEP) and chief of staff to Gov. Jon Corzine, appeared happy when she spoke for a couple of minutes following Obama’s remarks.

“There is no higher calling for me to lead this vital agency at this vital time,” Jackson said. “At the top of the list is the threat of climate change.”

“When it comes to selecting a steward of the nation’s environmental treasures, President-elect Obama could not have made a better choice than Lisa Jackson," Corzine said in a statement. “With her extensive background in environmental issues, coupled with her tenacity, work ethic, and genuine commitment to the environment, Lisa was my unequivocal choice to lead the New Jersey Department of Environmental Protection, and then as my chief of staff. She has steered the state through some of the most challenging environmental issues in New Jersey history – from global climate change to the adoption of a workable alternative energy policy. Her expertise will serve the nation well.

“Even though I lament her loss on behalf of the state of New Jersey, I am galvanized by the prospect of having one of our own showcased on a national stage with the opportunity to preserve our birthright for future generations. Lisa is up to the challenge. The nation’s environmental resources will be in good hands with her at the helm of the Environmental Protection Agency."

“She's the perfect choice," Lesniak said of Jackson. "She knows how to protect the environment, promote energy efficiency AND economic growth. The brightest star in the Corzine cabinet." 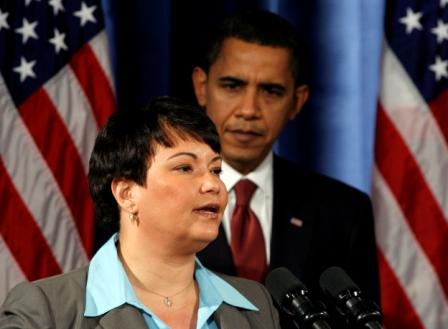