The often controversial 45-year political career of Robert Mulcahy appears to be over following his termination yesterday as the Rutgers University Athletic Director.

Mulcahy entered politics at age 28, when he ran for Mendham Councilman about a year after moving to the township. Boosted by President Lyndon B. Johnson's coattails, Mulcahy scored a rare victory for Democrats in heavily Republican Morris County. He became Mayor in 1970.

In 1973, Mulcahy backed Morris County Assemblywoman Ann Klein in her bid for the Democratic nomination for Governor. She finished second behind Brendan Byrne, who put Klein in his cabinet as Commissioner of Institutions and Agencies. Klein brought Mulcahy to Trenton with her as Deputy Commissioner, where he immediately became a strong Byrne ally and advisor. He spent most of his time as Byrne's unofficial troubleshooter.

When the Department of Corrections was spun off from Institutions and Agencies in a 1976 reorganization, Mulcahy became the first state Corrections Commissioner, and Klein became the first Commissioner of Human Services. After Byrne won re-election in 1977, he brought Mulcahy to the front office as in a newly-created position: Chief of Staff to the Governor. A few months later, he won an internal political battle with Byrne's Chief Counsel, Jerry Fitzgerald R, clearly establishing a chain of command in the Governor's office that remains today.

By early 1979, there was serious talk that Byrne would back Mulcahy as his successor in the 1981 gubernatorial campaign. But in August, Mulcahy unexpectedly resigned to become the Executive Director of the New Jersey Sports and Exposition Authority when Robert Harter quit to run the Houston Astros. (Byrne instead backed his Attorney General, John Degnan, who lost the primary to then U.S. Rep. Jim Florio. When Republican Thomas Kean defeated Florio in the general election, he kept Mulcahy on. 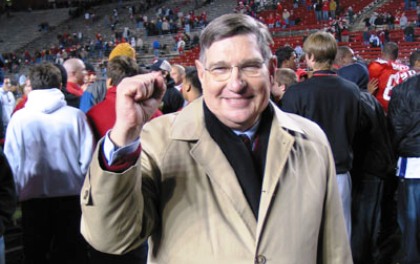