UNION – Talk to people in New Jersey’s legal profession and no one denies that what Secretary of Homeland Security Michael Chertoff perhaps lacks in charisma or courtroom presence, he compensates for with something more fundamental: profound powers of reason.

“Going back 20 years, he was a great lawyer, a brilliant lawyer – hard but fair,” said attorney Ted Wells.

His friends in the New Jersey political world say Chertoff’s a creature of hard analysis not politics.

“This is one of the brilliant legal minds of the country,” said Assemblyman Jon Bramnick (R-Westfield), who introduced Chertoff today at Kean University, where the Homeland Security Secretary and author of the USA Patriot Act reflected on his three-year term in the Bush administration.

His tenure included his grim mea culpa in front of Congress following what he acknowledged was his department’s 2005 failure to respond effectively to Hurricane Katrina.

But Katrina didn’t come up today as a cross-section of audience members in friendly fashion mostly picked the Elizabeth native’s brain about general public policy during the question and answer portion of his presentation.

“Controversial?” Bramnick said of his former Westfield neighbor. “How controversial is a guy when he gets almost unanimous support in the Senate in his quest to be Homeland Security secretary? The only one who voted against him was Hillary Clinton, because of Mike’s involvement in the Whitewater investigation.

“He’s not political,” Bramnick added. “Did he sound at all political? You have to understand, his father was a Jewish rabbi and scholar. If Mike’s a politician, I’m a monkey’s uncle.”

That’s an assessment echoed by Chertoff’s own people.

“We don’t do politics,” a member of his security detail said today as they ushered the secretary outside to the waiting SUV vehicles, following Chertoff’s hour-long remarks and press availability six weeks before he leaves his job at the end of the Bush era and his successor, Arizona Gov. Janet Napolitano, takes over at Homeland Security.

Naturally as he exits, there’s a difference of opinion about Chertoff, a former U.S. Attorney in New Jersey who was born and raised a mile and a half from Wilkins Theater on the Kean campus.

That difference is most precisely on the issue of politics, as his Garden State critics – among them U.S. Rep. Steve Rothman (D-Fairlawn) – maintain that the Jersey guy was silent when the Bush administration allowed politics to guide the distribution of federal Homeland Security dollars.

“We screamed that money should be divided on the basis of merit – not sent to places like Kansas and Wyoming,” Rothman said in a phone interview. “Chertoff knew it was wrong but he was such a loyalist he never criticized the Republicans. He may have been the most righteous guy behind closed doors, but he chose not to resign. He may be brilliant but he never spoke about the 800 lb. gorilla in the room.”

In his remarks today before a packed theater of 1,000 people, Chertoff, the second director in the history of the department formed in the aftermath of the 9-11 terrorist attacks, talked about the problems of trying to build an effective agency. Chief among his concerns has been – and remains – the unwieldy condition of government itself.

“There’s a natural inertia in all bureaucracy to protect your turf. The idea is, ‘This is our domain. Back off. We’ve always done it this way. Leave us alone,” said the departing homeland security secretary. “There is a fragmented Congressional oversight system, and often a pull to have synchronized activity results in resistance, because Congress feels they’re losing their turf.

“But every time you see a Mumbai,” Chertoff added, “we must ask the question, ‘Are we putting protection of our country first above turf consciousness?’”

U.S. Rep. Bill Pascrell (D-Paterson), a member of the House Committee on Homeland Security analyzed the remark as intentionally vague.

“If he’s saying there are too many committees the Department of Homeland Security has to report to, then I agree,” Pascrell said in a telephone interview. “If he means that’s why the Department of Security has not responded and wants to kick the can down the road, then I disagree. From the beginning, Bush didn’t want congressional oversight. He fought us. He wanted an imperial presidency, and we dragged the administration kicking and screaming to the point where Bush accepted that we needed a Department of Homeland Security.

“What Chertoff said about turf wars is correct,” Pascrell added, “with all of the chairmen of committees and subcommittees involved. The structure needs to be revisited, no question."

Rothman read in the remark an underlying attempt to blame. To Chertoff’s complaint about the difficulty in trying to align either Congress or other government agencies in the cause of Homeland Security, the congressman hears a continuing attempt by another member of the Bush administration to throw up his hands in the face of problems that are simply part of the job description.

“He needs to provide proof of how he was held up from doing what he was assigned to do,” said the congressman. “The trouble is this is an administration which lacked intellectual curiosity.

“Remember,” Rothman added, “Chertoff’s a politician. He’s been a Republican loyalist forever. The question is why didn’t he admit when the emperor had no clothes? He never did that. That’s not to say he’s not smart, hard-working and honorable. But this is about political loyalties and a refusal to take responsibility. His administration is Herbert Hoover and James Buchanan – and he was one of the principles.

“Turf wars at the Department of Homeland Security are a very real issue,” Rothman conceded. “But we’ve (Congress) suggested ways to look at it. The bottom line is if you’re the president, you appoint a CIA director, a secretary of Homeland Security, a secretary of state and a secretary of defense. They’re supposed to work (together) with those people to fix things. Chertoff’s allowed to vent a little bit, fine, but this was his job. …He was given everything he asked for. It’s not easy dealing with smart people to get things done. There’s no news here. People have written books about the difficulty of making bureaucracies work. But to say government’s difficult is like saying, ‘Oh, my God, there’s gambling in Casablanca.’”

In addition to critiquing the lack of integration at the 182,000-employee, $52 billion department Chertoff cited the particular challenge of what he calls “low probability but high consequence events." This administration had the hard luck of running headlong into three of them: the 9-11 attacks, Hurricane Katrina, and the Wall Street financial meltdown.

But Chertoff pointed out that the U.S. has not been attacked successfully in the last seven years.

“The president has led in a determined way,” he said. “If you stand back and look at the results, they include not having to go to the funerals of young Americans. We owe him a debt of gratitude.”

There was modest applause.

A woman in the audience asked Chertoff if he would consider a teaching post.

“I won’t teach,” he answered. “I’ve had such a fast-paced existence over the last two decades I don’t know if I could just be a teacher."

Confidantes say that after two decades in public life and now with two children in college, the 55-year old Chertoff wants to make some money.

“I think Michael Chertoff’s legacy in law enforcement – going back to when he was U.S. Attorney – will be viewed positively,” said Wells. “I think the biggest negative aspect of his career will be his department’s response to Katrina, and I think that’s unfortunate because it’s my personal belief that wasn’t him so much as the people with him.

“The Patriot Act is more complex, because there are his personal positions versus the administration’s views,” Wells added. “Michael is very smart and thoughtful. Brilliant. But then you have to figure John Ashcroft and Dick Cheney were getting in there, so it’s hard to make sweeping statements about his involvement in the Patriot Act."

Bramnick too acknowledged the influence of other members of the Bush administration, which hesays may not always have been positive. The clash of former FEMA Director Michael Brown and Chertoff serves as one example.

“He works within a framework,” Bramnick said. “He’s not totally in charge of policy. This man is very analytical, a very smart person, and he approached everything on that level. I would say this; I would give the president some credit for picking him. Just listening to him today, I sat there and I said to myself, ‘I love this.’ Policy. That’s what I like to do."

While critical of Chertoff, Pascrell ultimately regards him favorably.

“For one I agree with the secretary that FEMA should be part of the Department of Homeland Security,” he said. “We have a ways to go, but I think that coming in when he did, he reorganized the department and committees. I think he fought the good fight."

He argues that fundamentally the Bush administration – and by extension erstwhile department heads like Chertoff – rejected or misunderstood the instrument of government.

“Individuals have difficulty sharing power,” Rothman said. “That’s the intellectual challenge of being in government. It’s not about putting up posters and going to chicken dinners. The challenge is when you get in there, you have to make it happen. I understand as a judge and U.S. attorney he was brilliant, but we’re talking about his job as sectary of homeland security. Today’s speech was just palaver. It could have been written by Karl Rove. There was nothing there."

Whatever the differences, “His best attribute is he was born and raised as a New Jersey guy,” maintained Bramnick when he introduced Chertoff today.

“Not just a New Jersey guy, but a Union County guy,” said the detail-conscious Chertoff when he stepped up to the podium.

There was applause, and at the finish – just in case the outgoingHomeland Security sec

retary wants to stay close to his roots – “that teaching job is available on an adjunct basis,” Kean University President Dawood Farah tried as Chertoff left the stage to a round of hometown laughter. 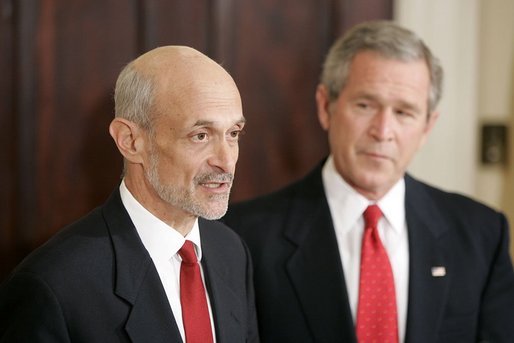