At Mayfair Farms Restaurant in West Orange on Saturday, the St. Patrick’s Guard of Honor of New Jersey hailed Ray Durkin, or the chairman, as they call him here in a nod of respect to his many years of service to the Democratic Party.

Full-blooded and hybrid and old and new country Irish fathers and their sons – Giblin, Byrne, Stack, Barrett, McCarthy, Baroni, Mac Donald, O’Toole and Codey – for one afternoon absorbed any and all of New Jersey’s other ethnic groups into the arms of Durkin’s Irish-America.

Durkin, who led the Essex County Democratic Organization from 1980 to 1992 in addition to serving as chair of the state party from 1985 to 1989, was the 68th St. Patrick’s Guard of Honor on a list going back to 1940 that includes President John F. Kennedy, Justice William J. Brennan, Jr., and governors Richard J. Hughes, Brendan Byrne and Richard Codey.

In accepting the award, the former Newark City Firefighter and head of the West Ward Young Democrats who has been lowkey politically over the course of the past 12 years, said he was most proud of his wife and five sons, including Essex County Clerk Chris Durkin, who introduced his father on Saturday.

“My father came from a neighborhood where politics was part of the fabric of life,” the son said of Ray Durkin. “He combined that with the leadership ability he had and his endearing qualities of humility and humor.”

The chairman grew up in the Vailsburg section of west Newark, one of three future Irish American state party chairs to come from the same Sandford Avenue neighborhood.

The other two, whose families both came to Newark from County Roscommon, werethe son of the late state Sen. John Giblin, Tom Giblin,an assemblyman from Montclair who served as party chair from 1997 to 2001; and Joe Cryan, current party chair going back to 2006 and son of the late John Cryan, an Irish immigrant bus driver and South Orange Avenue tavern owner who served as as an assemblyman and as county sheriff.A fourth chair, the late Phil Keegan, also came from Vailsburg.

“The Irish started hitting the Vailsburg neighborhood hard in the 1930s and a lot of them worked as janitors, firefighters and cops,” said Giblin, son of a Newark city commissioner, on his way in to the packed banquet hall to honor Durkin at Saturday’s Christmas Award Luncheon.

The event had a return to the old neighborhood feel to it, as if the older Irishmen were walking the younger ones back to the ward they once ruled and finding the familiar presence of generations now gone in stories about West Ward Party Chairman George McCormack, Deputy Mayor Pinky Keegan and Mayor Leo Carlin.

Many of the Essex County Irish politicians in the room – suburban mayors and legislators and operators for the most part- come out of a political tradition that reached an apex of executive political power in Newark with the mayoral reign of Mayor Carlin from 1953 to 1962.

Of course, Carlin lived in Vailsburg, along with the man who ultimately dethroned him and ended Irish control in the city – U.S. Rep. Hugh Addonizio (D-Newark), a 14-year veteran of Congress.

But mayoral power in New Jersey’s biggest town was only part of an impact the Newark Irish would have on other areas of government, including the federal judiciary with the 1956 appointment to the U.S. Supreme Court of William J. Brennan, Jr., son of a city commis
sioner.

Some of the connections go way back to Down Neck or to the old county.

Some of the other connections were forged right in Vailsburg.

“When I was in the service in Germany, my mother would write all the time that there was a wonderful man who lived across the street, John Cryan, who brought her back rosary beads and prayer cards whenever he went to Ireland,” Durkin recalled.

In the neighborhood, most of the Irish families came together at Sacred Heart Parish, where school was free for churchgoers and the monsignor paid half the students’ college tuition.

“Tom Kean beat Florio in a razor-thin election and Ray came to prominence and went on to become the state chair,” said Barrett, who described Durkin as a political leader who could think three or four moves beyond those around him, and who used stealth moves more than confrontation to get what he wanted politically.

Going back to their roots in politics, Adubato and Durkin still remember the watershed 1962 mayoral election and the ethnic tensions that ultimately resulted in the Italian electorate catapulting Addonizio past Carlin to win by a 2-1 margin.

“There was a picture of Leo Carlin in the Newark Evening News, holding up his hand,” said Durkin.

“Addonizio charged that Carlin was raising the specter of the Mafia by referring to the Black Hand,” Adubato explained. “When he tried to tie Addonizio to the Mafia, the Italians were motivated.”

“Addonizio asked Carlin, ‘are you insinuating that the Black Hand is going to be at work if I get elected,’” said Giblin.

“Carlin kind of got sucked into it. That was part of what brought Carlin down. There was also the snowstorm. The Newark Evening News showed a picture of Carlin on a chaise lounge in Florida during a major snowstorm in Newark. That didn’t go over too well.”

With Carlin’s and then later Addonizio’s fall from power in 1970, Adubato backed the ci

The Italian-American party leader stayed in Newark, and remains leader of the North Ward Democratic Organization.

Having moved out of Vailsburg to the Essex and Union county suburbs in the late 1960s during the waning years of the Addonizio administration, the Durkins, Cryans and Giblins began making their own transition to politics in a larger theater of operations, going statewide with old fashioned West Ward know-how.

If they lost Newark, the Irishmen’s continued high level presence in statewide politics still provides Adubato with an opportunity to shake up staffers when he asks them to tell him who’s the most powerful ethnic group in New Jersey and they answer – “the Italians” – only to be met with the boss’s weary admission that, particularly given the power of Codey, a cousin of Durkin’s by marriage; Assembly Speaker Joseph Roberts (D-Camden); and Cryan, the Irish have the political upper-hand.

As usual when it comes to Essex County events like this, Father Ed Leahy, headmaster of St. Benedicts Preparatory School in Newark, was present to remind all of the politicos, whether still striving or retired, whether in the generation upcoming or in the one outgoing – that it’s all finally fleeting.

To kick off Saturday’s event for Durkin, Leahy met the initial half-hearted murmurings of “amen” prior to the main course of corned beef and cabbage with a stern, “Let’s try it again. You’ve got to say that like you mean it."

And given a second try, the voices – Irish and otherwise – boomed, “Amen;” a din that was no less impassioned when Ray Durkin stood at the podium at the end of the afternoon and the crowd gave a long and loud standing ovation for the chairman. 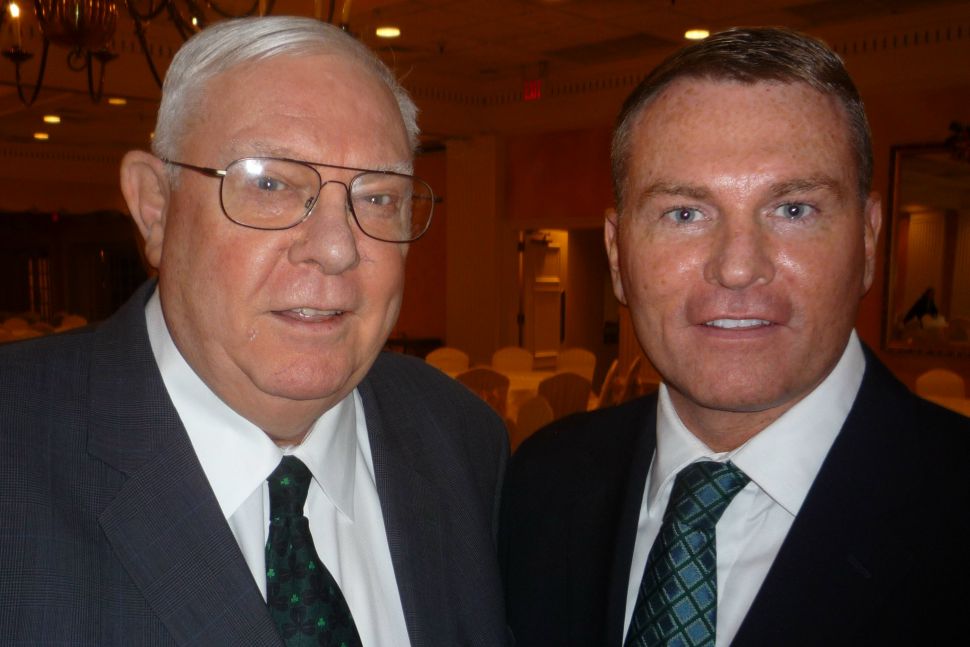