In short, the most joyfully considered and relevant transition of power here was from King to Obama.

“I’m a child of the 1960s. There are still a few of us around, right, Mildred?” said Gov. Jon Corzine, finding Council President Mildred Crump’s smiling face in the crowd. “King defined our aspirations, and what we could seek to find. When he was killed in Memphis he was talking about a living wage. We have a long way to go, but at this moment, when Barack Obama is sworn in, Martin Luther King, Jr.’s dream will become a reality.

“God bless the legacy of Martin Luther King, Jr., and the presidency of Barack Obama,” added Corzine, and moments later, Crump cried, “That’s my governor,” as people in the crowd lurched to their feet.

A superficial scan of the packed pews revealed only half the congregation coming out of their seats to stand for the governor, not great in an election year on an impassioned invitation from a popular local leader. But closer inspection showed those who remained seated apparently did so out of no steely resistance to Corzine. They were senior citizens, many of them very old, who would later stay in their seats when keynote speaker Forest Whitaker, an Academy Award-winning actor, brought down the house with his meditation on the King-Obama hand-off.

Sponsored by Mayor Cory Booker and the City Council, the better angels of our nature anniversary on the weekend before Tuesday’s inaugural featured Whitaker, and charged-up musical offerings by jazz pianist and Camden native Eric Lewis (Aka ELEW), the Garden State Choral Chapter and Arts High School soloist Lawrence Dandridge, who sang “Abraham, Martin and John.”

“We’re not going to limit ourselves,” an ebullient Booker said after the celebration to a back chapel question about why Obama appears to be paling around with the president during the transition, even telling CNN’s John King on Friday that Bush is “a good man.”

“Look, people saw that the war was started on a false pretense, and America has some healing to do but so much of that began already with the results of the last election,” Booker said. “People saw in Obama’s candidacy an opportunity for change, powerful change on so many levels. From our vantage point, he understands urban issues. He understands what ex-offenders face when they’re out there trying to get a job after incarceration. He understands our needs for affordable housing; special needs housing; and foreclosure prevention. He gets it. He wasn’t born in a country club.”

Obama’s the man, but everyone’s going to have to step up now said Booker, who invited Eric Lewis and Whitaker to Grace Church for the historic celebration because they embody Americans who contribute positive energy and in that regard fulfill a vital social responsibility, he said.

“Our cup runneth over in Newark today with these men whose talents are part of a larger movement for social change,” said the mayor. “We embrace the light of converging brilliant individuals here today.”

From the church pulpit, Whitaker, whose documentary about Newark, “Brick City,” is due out Aug 26, urged people to get involved in public life: to write their congress people and put pressure on the Obama administration, to answer the call to activist citizenship defined by King and refined by Obama.

For those already engaged in the political process who helped Obama secure a 76 to 23 percentage point victory over John McCain in Essex County, “the most treasured memory will be the look and expressions of everyone on election night- from party leaders and volunteers alike when Obama was declared the winner we cried together, we laughed, we hugged, we danced,” in the words of Democratic Party field coordinator Safanya Searcy. “It was amazing because no matter how great or small one's role was in this election, collectively we joined forces and changed the direction of this country. All while making the greatest historical mark our nation has seen in a long time and that, for me, is priceless.

“Those are moments that I can share with my children and grandchildren, moments that will be a part of the generations to follow me,” Searcy added, “just as t
he moments my mother and grandmother shared of other figures of prominence like Malcolm X, Shirley Chisholm, and Dr. King."

But how long it would take Obama and/or the country itself to bury the goodwill or whether his efforts would be helplessly mired, or what the President-elect means in the context of a gubernatorial election this year as Corzine departed with Menendez, came as no pressing questions in the craggy Gothic bowels of Grace Church on Saturday, where at the transition point, Booker and a Newark crowd gave it up with the old spiritual, “Happy Day.” 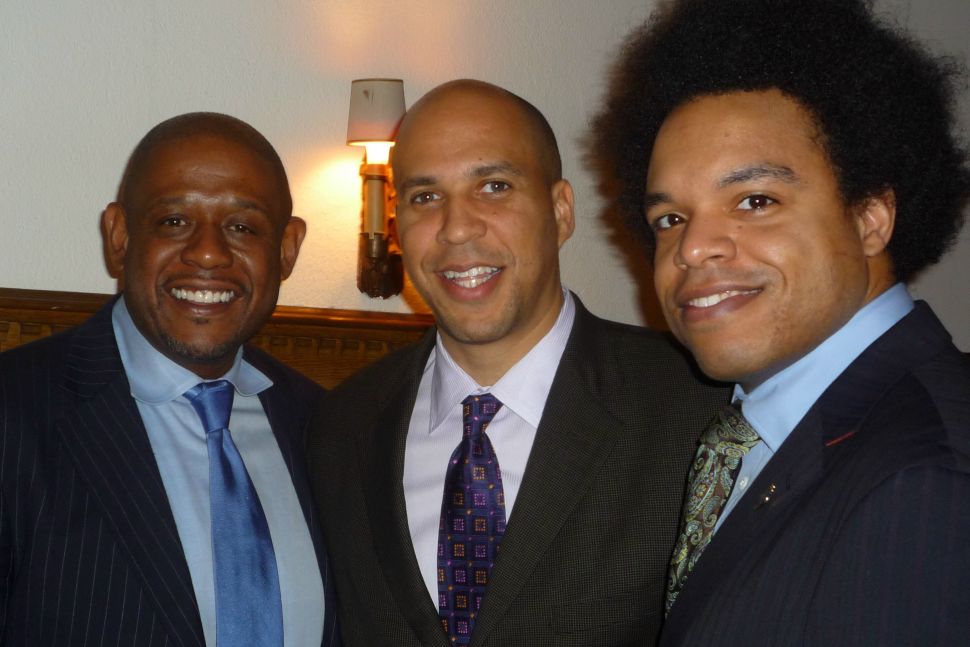