MOUNTAIN LAKES – Kicking off his 25th District Assembly campaign at the centrally situated and styling Zeris Inn on the side of Highway 46, Morris County Freeholder Doug Cabana summoned the forces of government to stand with him at the front of the big, packed room.

It was a potent demonstration of political heft as Republican freeholders Jack Schrier, John Murphy, William Chegwidden, Gene Feyl, former freeholders William Druetzler and John Inglesino and others crowded in behind Cabana, facing a room that contained no fewer than 10 Morris County mayors not to mention deputy mayors and their dates and/or wives and council people and their significant others and attendant staff, political operatives, a sheriff’s surrogate, other former freeholders and elected officials and County Clerk Joan Bramhall.

All arrayed against bloated government.

“I stand with you tonight with the leadership of our county,” said Cabana, a municipal prosecutor and elected official going back 20 years to when he first served on the committee of Boonton Township, a northern Morris County mountain town.

The candidate’s eyes twinkled as he considered his hometown, spare right down to its few high country intersections. There’s no traffic light in the center of Boonton Township. There wasn’t 20 years ago, and there isn’t now.

“And we’re going to keep it that way,” Cabana said for the record.

“It’s no secret we’re being choked by high taxes… I pledge real property tax reform and a reduction in the state corporate income tax,” he said, a big blue and white sign with his name on it draped against the wall at his back. He wants to fight what he cited as the impracticable quotas imposed by the state Council on Affordable Housing (COAH) and the Highlands Act.

The towns with the largest number of registered Republican voters are Morris Township with 5,097, where Carroll’s presence could be offset for Cabana with the help of Murphy, who’s also from Morris; Rockaway Township and Roxbury Borough (where Bucco’s the town attorney) with 5,001 and 4,826 GOP registereds respectively; and Algeier’s Randolph with 4,883 Republicans, where Carroll also draws some key base votes.

While Cabana and Bucco both hail from the pared down Boonton Township – just 1,299 GOP voters – they both have countywide name ID, Bucco mostly through his senator father and Cabana through his service on the freeholder board.

He didn’t say it outright but his biting emphasis on the word now could have been construed as a dig at his brother-in-law rival, Bucco, who appeared to be shaking the same hands both Carroll and Cabana shook in the crowd with the similar realization that two men will win here and every packed room – even in enemy territory – is a chance to make voter contact.

Bucco, who’s married to Cabana’s sister, has never held elected office, and an observer in the audience heard with pronounced gusto Cabana’s reminder – reinforced by the endorsements of his mates – that he himself had served for years on the freeholder board and on the New Jersey Association of Counties.

“This is a guy who is recognized by the governor – not because he’s tall, dark and handsome,” Murphy joked affectionately of Cabana in his lead up. “It’s because he’s the guy who walks and talks shared services,” specifically quarterbacking the creation of the Morris County Regional Emergency Deployment System (MCREDS).

Having stood up at his own kickoff late last year with a family-only crowd at the podium, Bucco objected to the argument that experience in elected office is fundamental for service in the Assembly.

“Being a public servant is more than just that experience,” Bucco said later as he considered a question about Cabana’s event.

“You’ve got to have a strong family behind you. Representing municipalities for so many years puts me head and shoulders above someone who’s held elected office for a number of years. I can tell you that my father (state Sen. Anthony Bucco (R-Morris) and Michael Patrick Carroll have called me in the past when they’re considering legislation and they’ve told me, ‘These are some things that are coming down the pike. How will they impact local government?’ And I’ll tell them.”

But in his speech, Cabana spelled out his inspiration: church, family, schools and respect for self and others and the integrity to fight for what’s right.

“Hard work, self-reliance, good government, Judeo Christian values, a system of free enterprise that is the envy of the world and the sanctity of human life,” he said.

The show of support for the veteran freeholder – whom Carroll and Assemblyman Richard Merkt (R-Mendham) denied in Cabana's 2005 run for the Assembly- was undeniable tonight, as bodies spilled into all sections of the big, partitioned room in the Mediterranean-style restaurant, hovering in conversation at the bar or happily going back for second and third helpings of the feast laid out in deep dish trays on tables pushed together in a dance hall hung with balloons.

Adding to the goodwill, Murphy and his wife just had a daughter on Saturday – their fourth – and the popular freeholder drew a parallel between his newborn and state politics under Democratic Party rule.

“As I was changing my baby’s diapers I thought about Doug Cabana,” said Murphy. “Trenton’s a mess, and we need someone to go down there and clean up that mess in Trenton.”

That’s when moments later a charged-up Cabana went to the head of the very friendly room to announce his formal entrance into the race for the Republican nomination, and many went willingly up to stand with him. 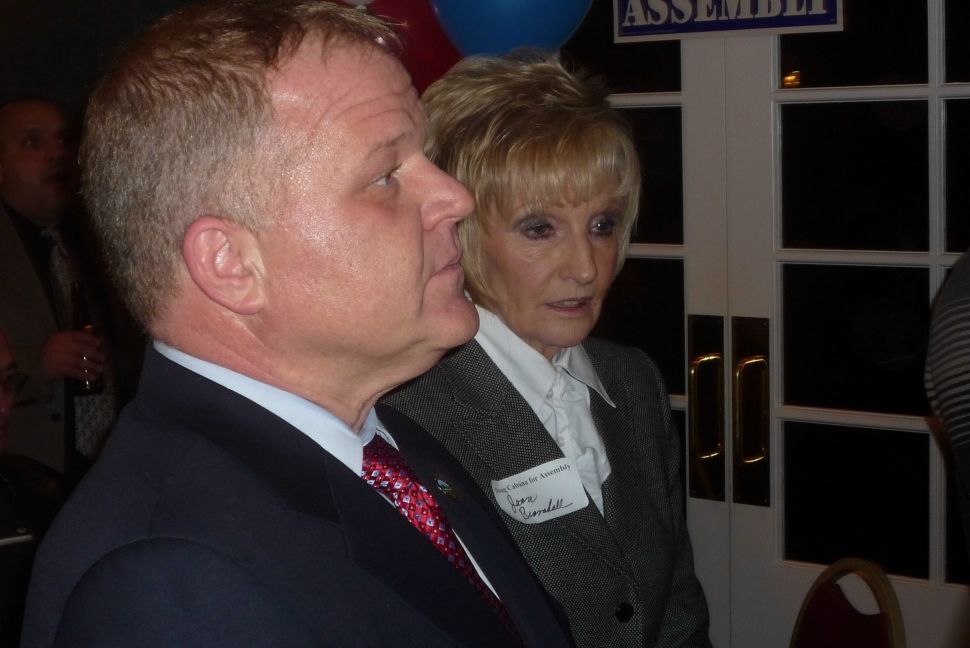