In order to make that leap to the next level, it comes down to this abbreviated week of eleventh-hour phone calls and handshakes for Assemblyman Michael Doherty (R-Washington Twp.) and Assemblywoman Marcia Karrow (R-Raritan Twp.), each of whom wants to be the next state senator from the 23rd Legislative District.

This is not a battle of opposing ideologies, so much as it is a muscle-flexing exercise for each candidate to prove he or she can sap votes out of the other’s home county.

In a big rural legislative district encompassing portions of the state’s western region where towns have names like Independence, Liberty and White, the Hunterdon-based Karrow and Warren-based Doherty consider themselves tough-nut conservatives.

They want to get rid of the Council on Affordable Housing (COAH) and ditch the Abbott Schools system. They’re pro-death penalty and anti-gay marriage. Doherty’s straight arrow pro life; Karrow against partial birth abortions. They fiercely opposed the Highlands Act.

As a member of the budget committee and a businesswoman, Karrow is the right person for a promotion during an economic downturn, her supporters say; while Doherty with his Army captain credentials and statewide appeal as a Rock-ribbed Reaganite and let-her-rip public speaker make him the obvious choice to give District 23 a competitive leg-up, according to his partisans.

“I fight on the whole range of issues Republicans want you to fight on,” Doherty, a patent attorney, told PolitickerNJ.com. “As a freeholder I cut the county tax rate 21 percent, and as an elected official I have opposed billions of dollars in spending, while also opposing the Global Warming Response Act and the stem cell center. I’ve been out there. I’ve been out there as a statewide activist. The goal here is to get the majority back for the Republican Party, and to do that you have to fight Democrats on the great issues of our times.”

“I’m a team player guy, an old college football player whose coach said you give me 11 guys to walk down a dark alley with and those are the same guys you want to play football with, and Mike is the Warren County legislator and a strong core conservative,” Steinhardt said.

Then there’s Karrow, who packages herself as the legislator back at home confronting unglamorous local issues while Doherty grabs Loneganesque headlines.

“I agree on those red meat conservative issues, but those issues don’t keep the Round Valley boat ramp open, they don’t answer the fears of people who live along the Delaware, help our farmers deal with a constant battle to stay in business, or help my district survive in increasingly urban New Jersey,” said Karrow, who suspended her business consulting firm to serve fulltime as a legislator.

“I’ve always said whatever it is you’re running, a religious organization, political organization or government, it has to be administered like a business, and here you have someone who understands business practices,” Kuhl said of Karrow. “Marcia is conservative in government.”

Four days before Saturday’s joint county convention, Doherty and Karrow face a final round of making connections with 212 committee people in Hunterdon’s 24 towns, and 181 in Warren’s 22 towns. The Warren-grounded Doherty tries to gin up his support across county lines, while the Hunterdon-reared Karrow attempts to do the same up in Doherty country.

“That race is going to be won by the person who uses enough shoe leather to prove to undecided committee members who really wants that seat,” said Hunterdon County Freeholder Matt Holt, who has his eye on the Assembly seat vacated by the winner of Saturday’s convention.

“There is no substitute for knocking on doors and getting a face-to-face relationship with voters,” said Holt, even as he made his own rounds of door-pounding on Monday. “The Hunterdon-Warren vote differential can be overcome. It’s about who shows up. Are we going to have an absolute full house or 50-60-70 percent turnout?”

If Karrow enjoys a natural edge in home county numbers – there are 28,341 registered Republicans in Hunterdon compared to 20,774 in Warren – Doherty has four more years of experience in the Legislature than the assemblywoman, and going back to 2005 when they first ran together, gets more votes than his ticket mate.

So far, they’ve both been working soft underbelly opportunities, with Karrow supplementing her advantage as a darling of Kuhl’s organization while securing the backing of nine Warren County mayors; and Doherty seizing on a GOP uprising in Hunterdon led by Bloomsbury Mayor Peck, who last year tried and failed to unseat Kuhl but did so while mustering 78 county committee votes to Kuhl’s 124.

Kuhl doesn’t see the Peck faction being able to secure victory for Doherty.

“I won 62 percent in a vote where an unprecedented 92% of the county committee members came to the reorganizational meeting,” said the county chairman. “Since then, people who may have voted for Peck – new people – have gotten to see my abili
ty and my associates’ ability to operate this party in an efficient and winning way. We gave Leonard Lance an 18,000 plurality in his congressional race. Peck will not be able to deliver to Doherty all of the votes he received at the reorganization meeting. Karrow is extremely popular in Hunterdon and has support in Warren County.”

Peck argues in an interview that he controls only his own vote, and that the Doherty-Karrow showdown is separate from the fresh-blood case he made to oust the long-serving Kuhl. The Bloomsbury mayor thinks the contest is too close to predict, and so does Steinhardt.

“They both start in their home counties but you also have to make decisions at home, so you can make enemies at home,” said the GOP chairman.”Does Michael pull enough support out of Hunterdon? Does Marcia pull enough support from Warren? I don’t know the answers to those questions.”

For his part, O’Malley feels comfortable giving the edge to Doherty.

“This convention is going to be very close but in the end, Doherty prevails,” said the Raritan Township mayor. “She trumpets her support in Warren, but how many of those people actually vote? Here in Hunterdon County, I have a vote and so does Mark Peck. I believe Mike Doherty has significant support not just from us but across Hunterdon County. I agree with him especially on the hardline views he takes on marriage and abortion.”

Karrow admittedly doesn'tcut loose on those issues the way Doherty does, but they both are self-brandedConstitutionalists.

“The Legislature down there gets pushed around by the Judiciary and I tell fellow legislators all the time that the Executive is minimizing your power, which you should be jealously guarding,” Doherty said. “I applaud Leonard Lance’s strict adherence to the Constitution, and his opposition to borrowing without voter approval.

“I’m a product of my environment,” the assemblyman added. “The Democrats were taking over when I went down, and I have seen what Democrats have done. It’s all about getting the majority back.”

Lance is staying neutral in the contest,and sois his predecessor, former state Sen. Bill Schluter, who believes, however, that Karrow will win the convention. “She projects better,” said Schluter, a moderate Republican in the Lance mold.

“In my 15 years in office. I’ve never voted for a tax increase,” said Karrow, reflecting back to her days as a committeewoman in Raritan Township. “I will fight for wallets and pocketbooks, and for small town New Jersey.”

Whoever wins will serve until at least November 2009. If she loses at the convention, Karrow says she will run again for her Assembly seat. But if he loses on Saturday, Doherty will give up his seat to contest for the senate as an independent Republican in the special GOP Primary.

Whoever wins that election in June will run in November’s special general election to fill the remaining 26 months of Lance's term. Whether Karrow or Doherty,the heavily Republican 23rd District is poisedfora rightward shift at the top of the ticket in the wake ofa more moderate era. 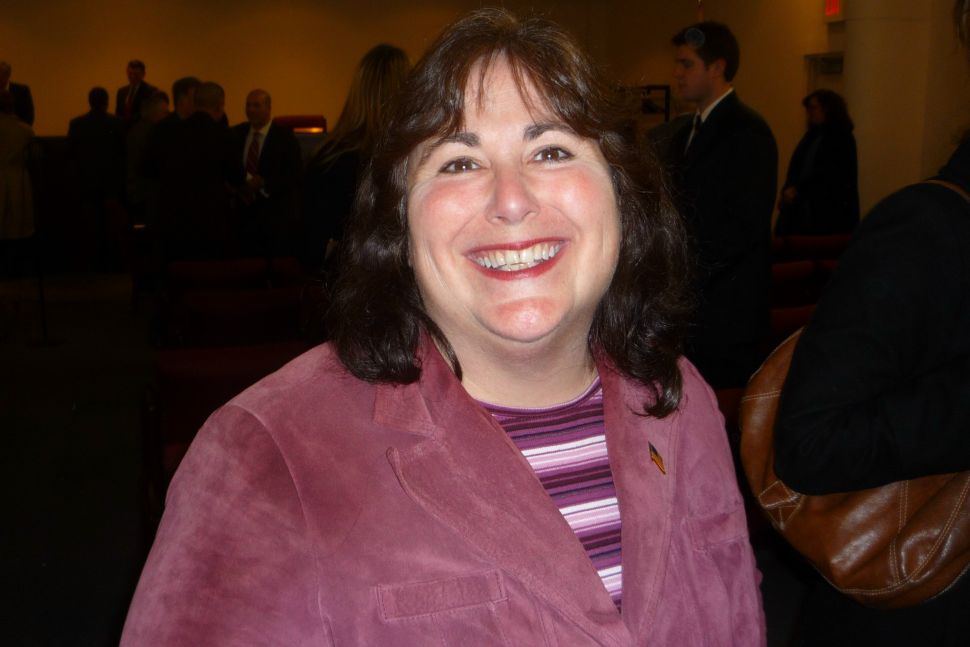