As he coasts out of office next week making the point to CNN’s Larry King that historians are still trying to figure out George Washington’s place in history, after all; and history, not polling, matters, President George W. Bush enjoys a five percent job approval rating uptick among New Jersey voters, according to Fairleigh Dickinson University PublicMind poll today released today.

That puts him at a still abysmal 21 percent job approval rating here in the Garden State, an historical low mark from New Jersey voters but for Bush’s nearly bottomed out pre-election totem.Seventy-percent of voters disapprove of the lame duck's job performance.

Conversely and not surprisingly given honeymoon period history for national leaders, President-elect Barack Obama comes to office with high marks.

The numbers: Thirty-four percent of New Jerseyans now say the country’s on the right track, up from 13 percent taken before the Nov. 4th presidential election.Fifty-two percent say the country is on the wrong track, declining from a high of 78 percent before the November election. "That change," according to the poll,"is reflected strongly among Democrats and independents rather than Republicans."

President-elect Barack Obama approaches his Jan. 20th inauguration with broad approval: 72 percent of all New Jersey voters polled approve of the way he is handling his transition to president, while just 10 percent disapprove.

“It is traditional that incoming presidents enjoy the goodwill of voters,” said Peter Woolley, a political scientist and director of the poll. “With all that is pressing on the public agenda, this president will need it.”

Woolley added that 51 percent of voters think the economy will be “about the same” six months from now.

“And those who think things will get worse (17 percent) in six months are outnumbered by the 29% who say things will be better,” the pollster added. “But the president-elect will have to achieve more than the outgoing president has in dealing with economic problems. Just 31 percent of voters say they approve of the government’s efforts to deal with the financial crisis while 54 percent disapprove. Disapproval reaches across income levels and ideology."

Woolley said the current president used up his political capital before the economic crisis arrived.

Democrats giddy to be out from under the Bush presidential era hope they can nurse Obama's numbers into November for Gov. Jon Corzine's reelection bid. They'recounting on the President-elect's stadium-filling popularity to give them some same-team steam and additional bankroll power for close down-ballot races.

Moreover, they hope the early molding of history does notinterfere withtheir attempts to steadfastly lash presumptive GOP gubernatorial nominee Chris Christie to the president who appointed him U.S. Attorney. 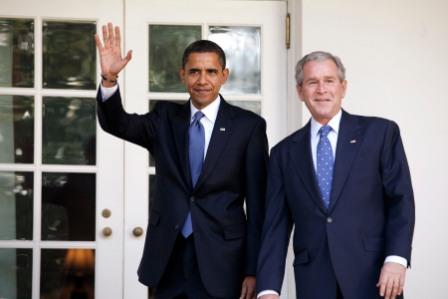