BRANCHBURG – The Lonegan forces tried to bill this event as “the Thrilla in Branchburg.”

But it proved no Ali-Frazier III this morning, and probably rated little better than the Republican gubernatorial primary of 1985 in terms of give and take, as four 2009 Republican candidates for governor assembled for the first time at a breakfast meeting sponsored by the Somerset County Federation of Republican Women at the Fox Hollow Golf Club.

After arriving moments before the event began, speedily working the room and delivering a five-minute set of remarks, Christie told the crowd of 150 people that he had to attend his son’s basketball game and hoped they understood.

Asked on his way out the door if he was disrespecting Franklin Mayor Brian D. Levine and Assemblyman Richard Merkt (R-Mendham) by not remaining to hear their presentations, Christie, who had spoken immediately after Lonegan, told PolitickerNJ.com, “This is about respect for my son, who has a 10:30 basketball game. I’ll have plenty of time to see them.”

“I assure everyone I will stay as long as needed to answer your questions,” Merkt said at the close of his remarks.

The perceived Christie diss came as Merkt’s and Lonegan’s handlers were already complaining about an 11th hour format change from the rules laid out in an original Dec. 4th federation email describing four minute presentations followed by questions and answers.

“On Thursday night we receive an email laying out a format for the breakfast in which each candidate would get five minutes of microphone time and no Q and A,” said Merkt campaign manager Chris Veins.

Kate Whitman, first vice-president of the federation, said, “We never used the term ‘debate’ to describe the event, and felt given the crowd of people, we wanted a controlled format.”

She said the federation received no pressure from the Christie campaign to disallow questions, but made the decision independently. And, yes, she admitted, in an environment in which they heard that at least Lonegan might try to mix it up, they didn’t want the occasion to devolve.

“There are more people here than usual,” said Somerset County GOP Chair Dale Florio,” a point confirmed by the presence of Lonegan diehards like Jesse Kurtz, who left his Atlantic City home at 6 a.m. to make the breakfast.

As they ate their breakfast, most people seemed happy just to hear the speeches.

In seeming defiant answer to GOP establishment fears that he means to drive the primary contest into dogfight territory, Lonegan in his remarks carefully defined what he interprets as the “high” and “low” roads of this campaign, describing the former as freedom and liberty, and the latter as “the central planning and social engineering state that New Jersey has become under Democratic Party leadership.”

If Lonegan’s ethnic references to his Irish ancestors who fled the potato famine and Italian forbearers who escaped from Mussolini created any sparkle of recognition from his fellow Irish-Italian Christie, the latter didn’t show any emotion, staring mostly straight ahead until it was his turn at the podium.

When he spoke, Christie condemned Gov. Jon Corzine for using “your credit card to spend for their special interest constituencies,” and for looking to blame national and local politics as reasons for why New Jersey is the “least competitive state in New Jersey.”

Due to formally launch his campaign on Wednesday, Christie signaled his intention to wrest the environmental issue away from Democrats this year, describing as entirely offensive the current 5-1 market rate to affordable housing state plan that would spawn 500,000 to 700,000 units of new housing.

“That will ruin our quality of life,” said Christie, describing the Council on Affordable Housing (COAH) Act as “one of the worst environmental quality decisions.”

The candidate presented himself as a man who won’t be afraid to make hard and unpopular decisions.

“I will not concern myself with more than one term,” Christie said. If you give me four years, I will give you four years back.”

Speaking just days after he formally launched his run for governor, Levine noted his managerial record in Franklin Township, where he was able to work with the owner of a Tofu factory to find the most advantageous location for business, thereby preserving quality of life while bulking up an appropriate manufacturing economic base.

Merkt received a favorable response from the crowd.

“It’s been amateur hour at the front office for the last four years,” said the veteran lawmaker. “Now Assemblyman Biondi and I have a bill in to get rid of COAH, which the Speaker will never let see the light of day. But as governor, I will kill COAH, bury it and drive a stake through its heart so that it never rises again.”

That prompted an Armed Forces-sized “hua” from the back of the packed room. 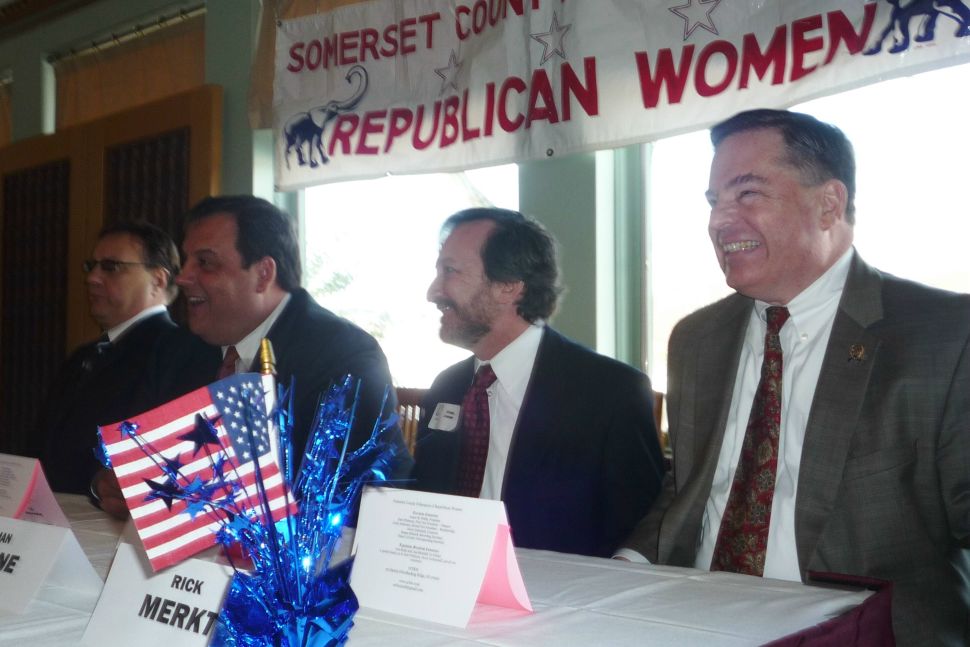