The governor attended the Inauguration earlier today then made a beeline back to New Jersey to be with this crowd of Obama supporters from Middlesex and Essex,who were joined bywell-wishers coming from as far away as Camden.

While a New Jersey delegation whooped it up in downtown Washington, D.C, a bearded middle-aged man with a small entourage ducked through a back door in a hotel amid the highways somewhere in Edison, New Jersey.

Corzine entered the Holiday Inn ballroom, worked his way through a crowd of around 1,000 people and jumped onto the stage.

“I want you to party on down,” cried the governor, his arms outstretched. “They’re partying in D.C., and I’m glad I’m not down there, but here with you!”

Already pumped by the Inauguration, the audience got another Obama infusion moments later when the lights dimmed and silver screen-sized images of the President filled three projection screens accompanied by a grooving backbeat that flooded the big room.

Mixed by members of last year’s Obama Presidential campaign team, the show featured shots of working class Americans interwoven with signs bearing the familiar themes of “hope” and “change” and pictures of the candidate’s supporters on the trail, among them Newark Council President Mildred Crump and West Ward Councilman Ronald C. Rice in Jersey City on the night after New Hampshire.

Within that mix of images could soon be glimpsed a shot of Corzine and Obama first onstage together then later locked in what appeared to be a mutually consoling embrace, and when the crowd saw the second of these images the cheers went up a couple of octaves.

The silhouetted figure of Corzine in the audience flanked by Democrats rose from the darkened stage, observing the images of Obama and himself and America and hearing the words, “Yes, we can,” “Yes, we can.”

Someone in the darkness tried to get a chant going. “Corzine in ’09! Corzine in ’09. It fizzled fast, but then new shrieks filled the room as the show came to an end and the last image fixed in everyone’s mind was a return shot to that pic of Corzine and the President in a bear hug.

“He has already started to transfer Obama’s message to that of the campaign,” said state Sen. Shirley Turner (D-Mercer), who attended the Inauguration today with her family, and is awaiting the specifics of President Obama'seconomic stimulus package.

“In hard economic times, the governor is talking about shared sacrifice and like Obama, is hopeful,”Turner said.

In an appearance on Squawk Box earlier in the day, Corzine said New Jersey could receive close to $4 billion in federal stimulus money over two years to help pay for education and health care.

When the governor climbed off the stage at the Holiday Inn, he was mobbed. And also drawing attention on the ballroom floor in the vicinity of Corzine was a lifesized cardboard cut-out of Obama. 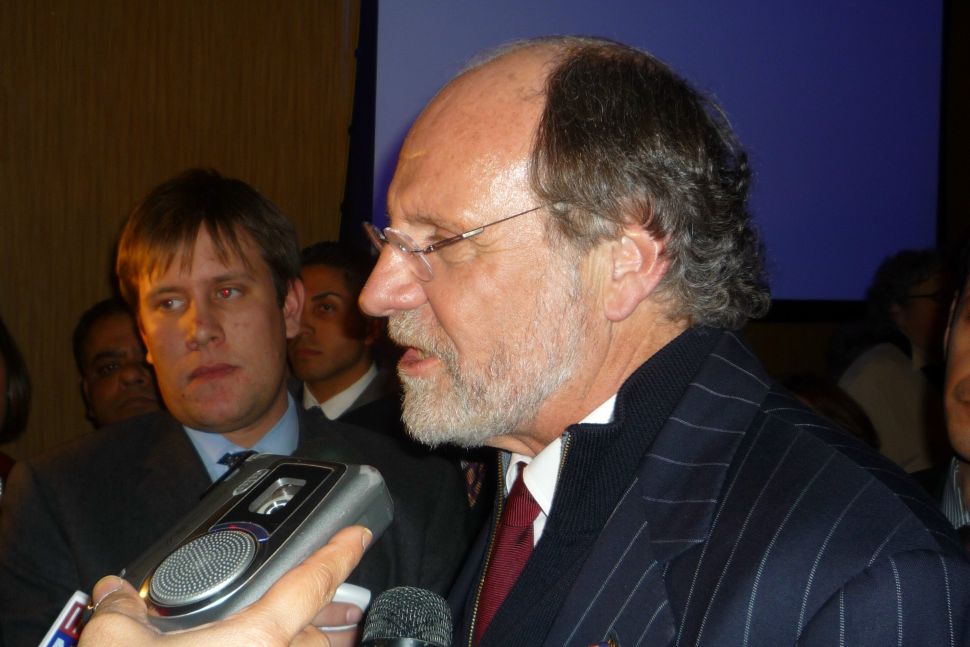