One of the classic stories of the New Jersey Legislature in 1968 were allegations that a Newark Assemblyman wanted to cancel a hearing on organized crime under pressure from a "lobbyist" representing Geraldo (Jerry) Catena, one of the state's most powerful mob bosses.

Senate Law and Public Safety Committee Chairman Joseph Woodcock held a news conference in December 1968 to say that his aide was told by Assembly Law and Public Safety Committee Chairman Richard Fiore that he was being pressured by Catena to stop legislative proposals to create the State Commission of Investigation, and to legalize wiretapping, and to permit certain witnesses to receive immunity from prosecution.

Claire Curran Johnson, a former New York Mirror crime reporter who worked for Woodcock, told investigators for the state Attorney General's office that Fiore, a 36-year-old substitute teacher and Recreation Director for the Newark Board of Education, claimed he wanted to head the Assembly panel "to stop these kind of things." "There is a lot of pressure. You just don't know how much pressure. Jerry is unhappy about it," Curran quoted Fiore as telling her.

Fiore denied the allegations, even claiming that he had never heard of Catena. "Listen, every time an Italian boy starts to rise in the state, they try to bury him," Fiore told the New York Times. "They got (Newark Mayor) Hugh Addonizio. They got (Newark Police Director) Dominick Spina and they got (former Essex County State Senator) Robert Sarcone. Now they want to get me. I tell you its a conspiracy against the Italian boys."The only proof Johnson was able to offer was a phone bill that showed a toll call to Fiore's home on the day he allegedly made his comments. The Newark Republican, whose father was a key Essex political figure, was never charged. He was re-elected in 1969, but lost his seat in 1971; in 1973, he was the GOP candidate for State Senate, but lost to an Independent candidate, Anthony Imperiale.

Woodcock, who would go on to serve as Bergen County Prosecutor (after losing his Senate seat in the 1973 Democratic landslide to Matthew Feldman) and was, briefly, a candidate for the 1977 Republican nomination for Governor, said that "New Jersey was the most politically corrupt state in the nation, and a place in which organized crime could get nearly anything it wanted."A week earlier, Assistant state Attorney General William Brennan III (the son of a sitting U.S. Supreme Court Justice) gave a speech to the New Jersey Sigma Delti Chi, a journalistic society, and alleged that three incumbent state legislators were "entirely too comfortable with organized crime." A few days later, Brennan increased the number to six — but initially refused to identify the legislators.

According to the Trentonian, Governor Richard Hughes and Attorney General Arthur Sills called Brennan into a meeting with Democratic Party leaders and asked him to say who the legislators were. Brennan declined, but said that he would provide the Governor with confidential files on the legislators. Hughes, a fairly sharp ex-Judge and Prosecutor, declined because he did not want to jeopardize informants named in the files.

Ridolfi's law firm had clients with ties to organized crime, Brennan said, and Horn had some tenuous ties to a bookmaking investigation. Friedland, also a lawyer, had allegedly acted as the middleman in a bid to end a criminal investigation of a suspected Mafia loan shark.

Selecky had testified as a character witness for Salvatore Profaci, a Hightstown restaurant owner who had "been charged with abusive language toward a (state) trooper in a traffic violation case." Profaci was the nephew of Joe Profaci, who ran the New York Mafia's Five Families for more than thirty years. Salvatore Profaci had "been caught by state police digging what was believed to be a grave in Millstone Township in 1968."

According to published reports, Farley and Laskin frequented restaurants with alleged ties to organized crime.

A legislative panel formed to investigate the allegations — headed by the highly-respected Senator Alfred Beadleston — eventually determined that Brennan's allegations had "absolutely no value whatsoever" and the matter was dismissed. But Ridolfi and Selecky were slapped on the wrist by the panel, who suggested that Ridolfi "had undesirable business associates and clients of questionable character" and that he "failed to exercise sound judgment when he learned that there was question as to the character and reputation of his business associates."

Soon after, Brennan — who admitted he lacked proof, but defended the accuracy of his information — was relieved of his corruption-busting responsibilities.

One member of the Beadleston committee was Willard Knowlton, a GOP State Senator from Bergen County. He was indicted in 1971 for accepting bribes in conjunction with construction of the "missing mile" between the New Jersey Turnpike and Route 80. Knowlton was acquitted, but was still dumped by the Bergen GOP. He sought re-election as an Independent, but lost.

In the next election, Selecky was dropped from GOP ticket (replaced by Karl Weidel), and Laskin was replaced by a 32-year-old attorney named Jim Florio. Exonerated, Friedland and Horn won re-election. Two years later, when the Senate was up, Farley, who had served in the Senate for 31 years, lost his seat in 1971 to Democrat Joseph McGahn. Ridolfi, a former Senate President who spent eighteen years in the upper house, retired. (His seat was captured by Republican William Schluter.)

Friedland, who lost his law license for several months, left the Assembly in 1973 and returned four years later to oust incumbent James Tummulty in a Hudson County Democratic State Senate primary. He was convicted in 1980 of taking $360,000 in bribes from a union pension fund, and after nearly seven years as a fugitive — and after faking his own death in his scuba accident– was captured in the Maldives Islands, where he ran a chain of diving shops.

Horn moved up to the Senate in 1973, and became Governor Brendan Byrne's state Labor Commissioner in 1976. Laskin was elected to the State Senate in 1977 and served until John Adler unseated him in 1991. He served as a Superior Court Judge from 1994 until he reached the mandatory retirement age of seventy last year.

1970, U.S. Attorney Frederick Lacey alleged that Essex County Sheriff Ralph D'Ambola had ties to organized crime. Two reputed mob figures displayed honorary badges given to them by D'Ambola when they were arrested on gambling charges. A federal Judge eventually ordered D'Ambola to recall more than 3,100 badges and automobile decals, which were sold by the She
riff's Office for $10 each.

Lacey later accused D'Ambola of laundering campaign contributions from Catena and another reputed mob figure, Angelo "Gyp" DeCarlo, to Sarcone, an Essex County State Senator who was running for re-election in 1965. Sarcone, who lost the race (and ran in the 1977 GOP gubernatorial primary), strongly denied the allegations. D'Ambola said that Lacey's charges were based on a personal vendetta stemming from Lacey's unsuccessful bid for the backing of Essex County Republicans to run for State Senate in 1963; D'Ambola supported Sarcone.

Lacey, who later become a U.S. District Court Judge (and mulled a '77 run for Governor), wound up receiving federal protection after alleged mob threats against his family.

D'Ambola lost his bid for re-election to a second term in 1970 to Democrat John Cryan, a former Assemblyman and the father of current Assemblyman and Democratic State Chairman Joseph Cryan. D'Ambola ran for the State Assembly in 1971 — on a ticket with Fiore; they lost to Imperiale, an Independent, and Democrat Frank Megaro.

For extreme junkies: How did a substitute teacher like Fiore wind up as Chairman of the Assembly Law and Public Safety Committee? Assembly Speaker Albert Smith of Atlantic County says he gave the job to Fiore "because he asked for it."

"That's all I know about it," Smith told a reporter. "I never even gave him an interview."

And what did the Speaker have to say about Woodcock's allegations against Fiore? Two words: "Holy smoke."

For extreme junkies, Part II: Fiore's running mate in 1967 and 1969 was Republican Ralph Caputo. He returned to public office in 31 years later as a Democrat, winning a seat on the Essex County Board of Freeholders. Caputo was again elected to the Assembly in 2007. 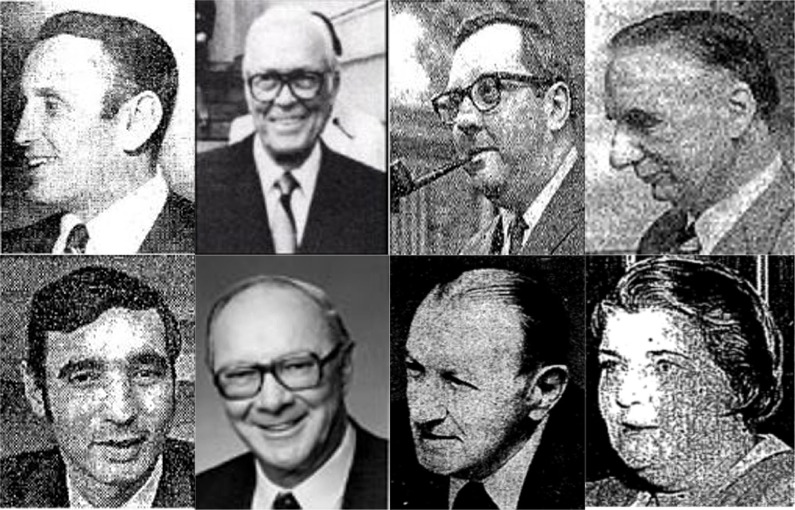