FRANKLIN TWP. – Good government Mayor Brian D. Levine tonight told PolitickerNJ.com he will formally enter the Republican gubernatorial primary before the end of the month and probably next week.

“I believe in bottom up rather than top down politics and I will be running my usual grassroots campaign, which is how I have run and won two elections as mayor of Franklin,” said Levine, a certified public accountant and pro-choice fiscal conservative who promises a shoe leather campaign in search of small dollar donations.

Levine’s entrance into the race appears on its face to create a case of two against two.

Like Christie, Levine favors overhauling Council on Affordable Housing (COAH) and Abbott School rules to make the programs more efficient, in contrast to positions held by Merkt and Lonegan, who want to abolish the programs.

To a question of whether the self-professed moderate Republican would balance a race between himself and the more moderate Christie on the one side, and conservatives Lonegan and Merkt on the other, Levine said of himself and his fellow Republican competitors, “We are four men with four different perspectives.”

In his On the Record interview with Lonegan this weekend before Levine’s announcement, NJN chief political correspondent Michael Aron asked the leader of New Jersey’s conservative movement if he had talked with fellow conservative Merkt about the possibility of one of them abandoning his gubernatorial bid so that a single, hard-right conservative would have a better shot at establishment frontrunner Christie.

Lonegan said he had not asked Merkt to exit the race, nor had he any conversations with him on the matter.

“I think primaries are an excellent way to encourage competition and ideas, so I hadn’t thought of that,” said Lonegan, who tonight told PolitickerNJ.com thatneither hadhe spoken to Levine,other than on one occasiona month ago, after initially sending the mayora copy of his book when he found out Levine was mulling a run.

“My question to Mayor Levine is the same question I have for Mr. Christie, and that’s, ‘Why are you running?’” said Lonegan.

Levine has consistently said he believes his stewardship of a large and diverse town and his dedication to efficient government place him in a unique position to serve as governor.

Over the next 48 hours, Levine said he would be finalizing his plans for his kickoff ceremony.

Speaking this morning at the Scholarship Breakfast of Franklin Towship, on the occasion of Martin Luther King, Jr. Day, the mayor said, “Individually we may not be able to right the injustice, as did Dr. King, but we can plant a seed by telling a family member, telling a friend, telling a neighbor. From that little seed of an idea, a mighty oak of justice will grow. Plant that seed – today, for yourself, for your children, for our fellow human beings, for future generations.

“So when your grandchildren ask you, ‘Grandma, Grandpa, what did you do?’ you can answer: ‘I was a teacher,’ ‘I was a doctor,’ ‘I was a lawyer,’ ‘I was a plumber,’ ‘I was a truck driver,’ ‘I was a technician,’ ‘I was a Mommy or Daddy.’ You can also say, ‘I saw an injustice and planted a seed of righteousness. And you see this good in the world? I helped initiate and foster it.’”

Contacted for comment, Merkt said of Levine, “Good for him. He’s a nice guy. The race gets more interesting as we get more players. This is not liberals versus conservatives so much as an opportunity for the GOP to stand for something. We cannot be the party that increases taxes and debt a little more slowly than the Democrats.”

Merkt said he and his operatives had no conversations with Levine about entering the race.

“About the only thing Brian Levine and I agree on is that this decision should belong to the voters,” Merkt said.

With access to $1 million, Lonegan leads the GOP money race, but he concedes his lead won't ho
ld when Christie starts tapping big dollar party donors. Merkt has $40,000 in the bank, Levine a couple grand. 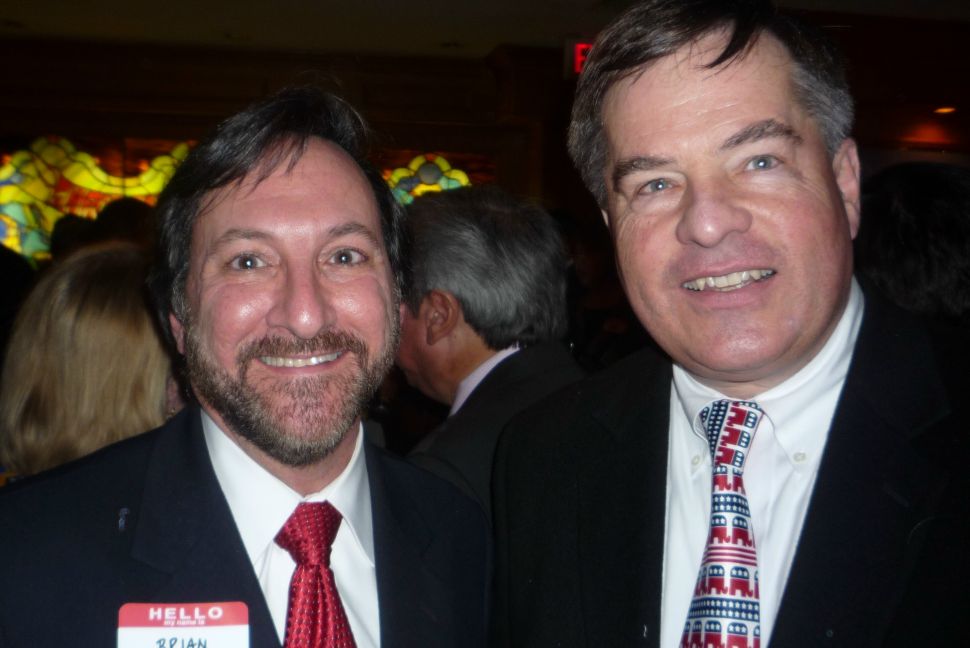