His wife, Anne Darby, is a former Deputy Mayor of Cranford. A Republican, she served on the Township Committee from 2003 to 2005. 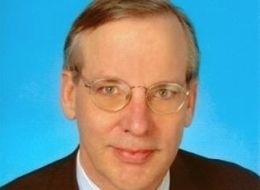