The GOP seems to be gearing up for a real Senate confirmation hearing if Governor Jon Corzine reappoints Barry Albin to the New Jersey Supreme Court later this year. The Republican members of the Senate Judiciary Committee have asked Chairman Paul Sarlo to set aside "at least three days" for hearing on Albin's potential nomination. This would be a huge change for a committee that typically spends just a few hours reviewing Supreme Court nominees.

Some insiders say Albin could have a problem if two unrelated constituencies wind up opposing his renomination. Albin angered progressive Democrats when he wrote the Supreme Court decision opposing same sex marriage. And he has a potential problem with conservatives over his votes in support of Abbot school district funding. Republicans and liberal Democrats could forge an interesting coalition.

Under the current State Constitution, no sitting Justice has been denied reappointment or confirmation. Chief Justice Robert Wilentz barely survived in 1986, winning Senate confirmation by a narrow 21-19 margin. Peter Verniero, whose renomination was viewed as potentially problematic, saw the handwriting on the wall and resigned before the end of his first seven-year term.

The letter sent by the Republican Senators (the press release doesn't identify any particular lawmaker) says that "a more exacting review of the person's qualifications is necessary and justified." The GOP asked for copies of all decisions authored by Albin and summaries of cases he was involved in. Senators typically don't perform this kind of review. 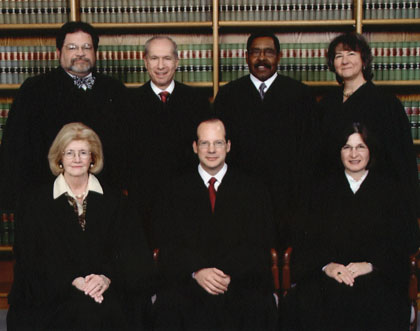