Barack H. Obama is sworn in by Chief Justice John Roberts as the 44th president of the United Statesas on the West Front of the Capitol as his wife Michelle looks on January 20, 2009 in Washington, DC. Obama becomes the first African-American to be elected to the office of President in the history of the United States.

“It was an inspiring and uplifting moment of hope when President Obama took the oath of office, not just for me, but for many millions more across our nation and the world, regardless of political affiliation. The president’s message on the responsibility, duty and legacy we all share as Americans resonates strongly in these challenging times that we face, when we all have to pull together," said U.S. Sen. Bob Menendez (D-Hoboken). "President Obama has made history by the barriers he has broken, and I believe he will continue to do so by instituting the change he represents for our nation.”

“This is a thrilling and historic day that re-energizes our hope in the American dream. President Obama’s inauguration is an inspiring and powerful moment that shows the phrase ‘all men are created equal’ isn’t just words on a document, but a living example of the opportunities America can offer," said Assembly Speaker Joseph Roberts. “Today also brings New Jersey a partner in Washington who shares our commitments to a strong economy, a protected environment and quality health care and education for all. But while today is one of emotion and inspiration, we also must remember to heed President Obama’s call to work together and share responsibility for guiding America forward. Hard work lies ahead, but by working together and taking responsibility, we can get it done.”

Mercer County Executive Brian Hughes applauded the new President. "As Barack Obama embarks on his Presidency, he does so with a broad wave of support. Today's inaugural ceremony was deeply inspiring to so many of us, even as our new President warned of the great, many, serious challenges ahead," said Hughes. "Like President Obama, I, too, believe America will meet those challenges." 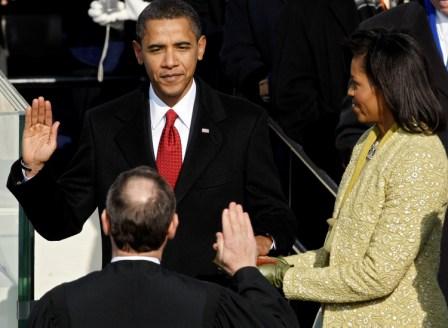