I voted for George W. Bush in 2000 primarily because he claimed America should have a "humble" foreign policy. In the debates with Al Gore he spoke about America being an example to the rest of the world rather than being a great power that would impose its values on other peoples. Also, during the campaign George Bush sounded as good as Ronald Reagan on the need to reduce the size and scope of the federal government.

When we are attacked on September 11th 2001 and it soon became clear who was responsible for the hijacking of the planes that crashed into the Twin Towers and the Pentagon, Americans rallied behind President Bush to go after Bin Laden and Al Qaeda in Afghanistan. However, by 2002 the Bush administration already was deviating from the 2000 campaign rhetoric of limited government. And it got worse for the American people in 2003 and 2004. The Bush invasion of Iraq, a country that was not a threat to the American people, was the last straw for limited government Republicans. Suffice it to say, by the time President Bush was seeking reelection against John Kerry in 2004, his neoconservative policies were anathema to Republicans like me who could not vote for him and support his big government agenda.

James Bovard, the author of The Bush Betrayal, summed up the Bush presidency well before it ends today.

George W. Bush came to the presidency promising prosperity, peace, and humility. Instead, Bush has spawned record federal budget deficits, launched an unnecessary war, and made America the most hated nation in the world. Bush is expanding federal power and stretching prerogatives in almost every area that captures his fancy. Though Bush continually invokes freedom to sanctify himself and his policies, Bush freedom is based on boundless trust in the righteousness of the rulers and all their actions.

No Child Left Behind, a Medicare prescription drug benefit that low balled future costs, the Patriot Act eviscerating the Bill of Rights, a preemptive war (a gross violation of the centuries old just war principle) in Iraq that will cost U.S. taxpayers trillions of dollars and has cost hundreds of thousands Iraqi civilians their lives, a nearly $200 billion farm bill that enriches wealthy agribusiness at the expense of working families, a homeland security apparatus that is an appalling invasion of privacy, the continued debasement of the U.S. dollar, and last but not least, trillions of taxpayers' dollars to bail out our dysfunctional financial system, failed auto companies industry and apparently any other sector that will soon line up hat in hand before President Obama.

And while the Bush sycophants have been lauding his "leadership" after 9/11 and the fact that America has not been attacked since that horrific day more than seven years ago, 9/11 did occur while Bush and Cheney were in power. Hello! Bush and Company failed to protect the American people from the hijackers on 9/11. By any benchmark the greatest national security failure occurred under Bush's watch.

On the political front, Bush and Company has put the GOP on its death bed. With the congressional losses in 2006 and the wipeout last November, only time will tell if another of Bush's legacy is relegating the Republican Party to permanent minority status in America. 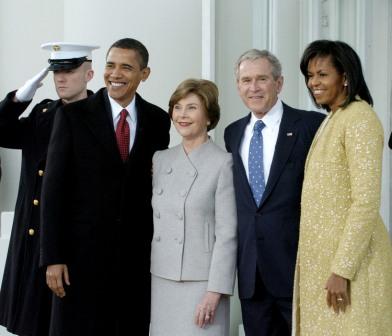