CAMDEN – Nearly a year after his crash and burn run for U.S. Senate, U.S. Rep. Rob Andrews (D-Haddon Heights) may stillpossess statewide fever,especially if a comment he made this weekend to PolitickerNJ.com proves to have deeper resonance in anunfolding campaign cycle.

"You'll be seeing me up north again soon," said Andrews, who last year made numerous forays into Bayonne, Newark, Woodbridge and Jersey City in an unsuccessful attempt to take down incumbent U.S. Sen. Frank Lautenberg (D-Cliffside Park) in the Democratic Primary.

For months prior to her decision to go after the mayor's job, Redd wasmany politicalinsiders' pick as a lieutenant governor candidate on a ticket withGov. Jon Corzine.

Unless he's mounting a highly unlikely stealth campaign for governor or simply alluding to northern travels he intends to make on Corzine's behalf, the South Jersey-based Andrews may have been signaling that with Redd dug in down south, hehimself now has an eye on the lieutenant governor's spot. 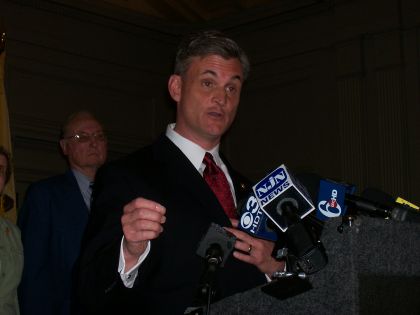