NEWARK – If Chris Christie wants to get in Gov. Jon Corzine’s face on the issue of urban renewal, he will have to first get through Mayor Cory Booker, who claimed bragging rights toNew Jersey's incumbentgovernor tonight in his annual state of the city address.

“We stand with you, Jon Corzine, because Jon Corzine stands with Newark,” said Booker, waiting while the packed audience here at historicSymphony Hall, first slowly, then nearly uniformly, stood to applaud the unpopular governor who faces reelection this year and the prospect of battling GOP frontrunner Christie.

The latter’s from Newark originally, and last week he launched his campaign for governor at the New Jersey Performing Arts Center downtown with the promise that he would create tax incentives in New Jersey’s largest urban center as a means of enticing businesses.

While conceding that the times aren’t the best nationally – even globally – Booker adopted a been-there-done-that Democratic response to the energized former U.S. Attorney.

“I have an incredible partner in Jon Corzine, who does not get the recognition he deserves,” said the mayor to mounting applause. He mentioned what he cited was Corzine’s successful leadership on precisely that issue of creating business tax cuts, and in particular the governor’s work on the Urban Transit Hub Tax Credit.

Amid rumors that he might assume the job of Corzine’s running mate and on a successful Democratic team become New Jersey’s first lieutenant governor, Booker told inquisitive reporterslast month that he’s committed to pursuing another term as mayor in 2010.

“Don’t do it, Cory,” at least one Democratic Party boss had told the mayor facce to face. “You’re a leader, not a follower.”

But as he riffed on Corzine tonight within a larger speech concerning all areas of his administration’s urban efforts, Booker the campaigner who repeatedly enlivened Obama troops last year for the presidential election, showed that LG or not he means to be in the thick of the campaign action again in 2009.

He noted double the affordable housing stock in the city from 2007 to 2008, and celebrated newly opened bars and restaurants here, and the addition of Newark for the first time in its own Zagat’s compendium of dining hotspots. Of the 20 groundbreaking ceremonies Booker’s administration spearheaded in 2008, ten of them came in the second half of the year, an accomplishment, the mayor added,amid a national economic downturn. A new residential housing complex – 80% market rate and 20% affordable – is slated to rise with two other buildings, including a 25-story tower championed by basketball legend Shaquille O’Neal, in the vicinity of the arts center.

Shaq’s also pouring money into a new dinner theater in the Central Ward, a tidbit the mayor relished sharing with the crowd as he explained how he couldn’t wait to take his old rival, Central Ward Councilman Charles Bell, to the movies.

“I’ll buy the popcorn,” said the mayor, at least the third acknowledgment he paid Bell, whom he also embraced heartily upon his stage entrance, a show of fellowship between combatants in last year’s Central-Ward-from-hell council race, which left Bell victorious – but bruised – over some of the Booker team’s campaign tactics.

Then, of course, there was the mayor’s lingering squint into the crowd with the house lightfast rising before he found North Ward Center patriarch Steve Adubato. With the news that the political war between mayor and boss ended last week, Booker had the audience turn up the volume in tribute to the founder and executive director of the heralded K-8 charter school, the Robert Treat Academy.

“Robert Treat is one of eight Blue Ribbon schools featured on the Department of Education’s website as a model,” Booker crowed. “But I love this next stat, the fact that the Robert Treat Academy last year had the highest test scores in all of Essex County.”

There were other shout-outs to be sure – to the public school system in the Brick City and the revamped Newark Housing Authority, butBookerpaid decided attention tothe two election year pillars of power here tonight – Corzine and Adubato.

In the crowd,there lingeredfretful mutterings concerning the whereabouts of state Sen. Ronald Rice (D-Essex), who didn’t attend tonight’s state of the city.

The back chatter was that Booker intends to fight in Rice’s home ward for county committee seats. Last year, Adubato teamed with Rice and beat Booker in the Central Ward. Maybe this year, Adubato’s political machine will help Booker against an alienated Rice, tonight’s apparent only no-show among Newark’s Trenton delegation. 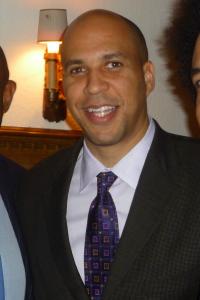