MORRISTOWN – Running on a platform of continuing Morristown's forward progress, Mayor Donald Cresitello announced his reelection bid here tonight at the downtown Hyatt Hotel in front of a crowd of about 100 supporters.

“I make things happen,” said the 63-year old Cresitello, who’s had a career in public life spanning 37 years, and who plans to make experience the issue as he attempts to stare down Democratic Party Primary challenger Tim Dougherty, a 50-year old zoning board chairman and former councilman.

Known less for scripted sound-bitesthan for a style that both delights quote hounds and gives his detractors ample room to try to brand him as a Town Hall Napoleon, Cresitello jumped onto the podium with no notes in his hand as he launched into a candid speech, at once vigorous and confessional.

“It was a difficult decision for me to make,” the mayor said of his gutcheck moment to pursue a second straight term (he also served as mayor from 1977-1981). “I have said a number of times that I wouldn’t run again. When I said that at a council meeting, somebody heckled me, and I assured the person I’m not running again. I am a person of my word, so it’s difficult. My word is my bond. But I guess that heckler was a fortune teller.”

At least one person in Morristown was irritated with the mayor for going back on his initial decision to seek only one term, and that was Dougherty, who didn’t run for reelection to the council in 2005 with the understanding that Cresitello wouldn’t run again in 2009.

An at-large councilman at the time, Dougherty backed Cresitello for mayor then in exchange for what he believed would be Cresitello’s support for Dougherty's mayoral run this year, but it didn’t happen, and now both sides are arming up quickly in front of the June primary.

Cresitello said he would have likely decided against running again had it not been for a nose-diving economy and his sense of a need for steady leadership at Town Hall.

“Those difficulties on the national level have trickled down to the local level,” he said. “Most municipalities are having a tough time with their budgets. The ship of state is in treacherous waters. I’m not sure there’s anyone on the horizon who can steer the ship to safety.”

He called Dougherty his friend, and admitted the two men had discussions about the older man yielding for the younger, but, “It’s not a time to turn the government over to somebody else,” said Cresitello, a construction contractor and lifelong resident of Morristown who choked up at one point when he recalled how he started out in his own business at 18 with two trucks on the road.

Dougherty, who issued a press release campaign rollout over a week ago and plans his own podium event in a couple of weeks, doesn’t deny Cresitello’s been a decent steward.

“But there’s not enough transparency in government,” said the challenger, who works as chief engineer at the Prudential Center in Newark. “We as citizens don’t know what’s going on. The mayor does not conduct an open dialogue with the people who pay taxes in town. I would like to see the council challenge the mayor’s development projects, but one person is controlling the process.”

The fact that Cresitello changed parties at one point to run for mayor as a Republican in a losing campaign also provides his opposition with an opening. A former chair of the Morristown Democrats and a lifelong member of the party whose wife now chairs the local Democratic organization, Dougherty will likely go after Cresitello’s party credentials at some point.

“That’s a dead issue,” the mayor said tonight. “The point is Timmy was on the council voting for (former Mayor) Jay Delaney’s budgets while I was voting against them. People here know I always did what was best for the City of Morristown.”

In the room at the Hyatt stood Council President John Cryan and Councilman (and former Council President) Tony Cattano, both of whom intend to pursue reelection on a ticket with Cresitello. The mayor and two council members will run with a third at-large candidate, yet to be determined, the mayor said. Also up for reelection this year, At-large Councilwoman Michelle Harris-King won’t run with the Cresitello team.

Dougherty said he doesn’t know if he will run alone or with a ticket. “As of right now, I have not decided to put a line together,” he said. 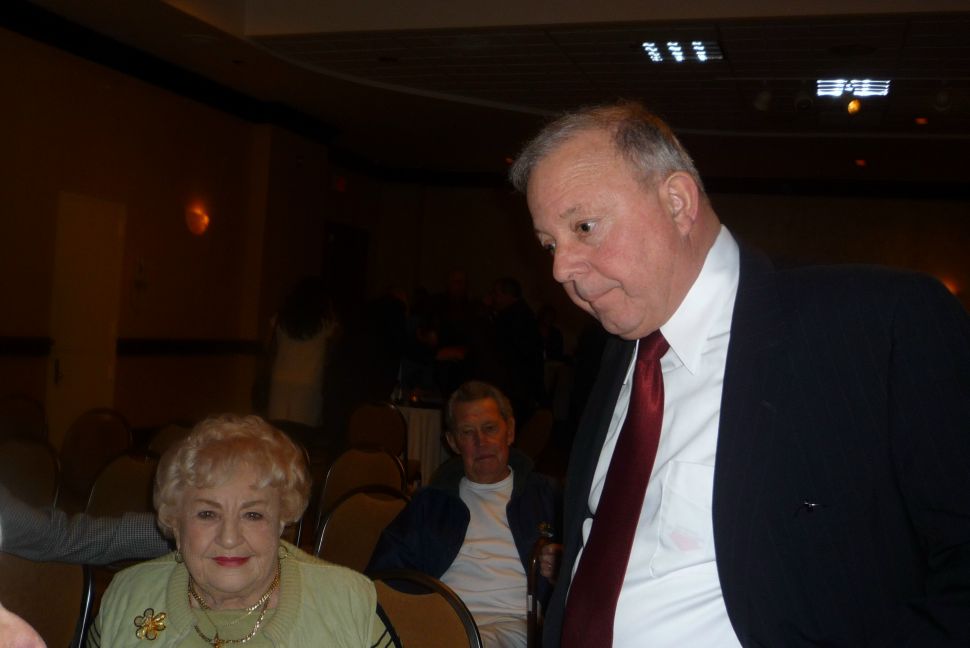