Victory for the veteran DiMaio at this special, joint-countyconvention hinged on his reaching into the more voter-dense Hunterdon County to pilfer votes from Peterson's backyard.

In his first ballot loss to DiMaio and Peterson, Hunterdon County Freeholder Matt Holt, a moderate,won 42 votes from Hunterdon and 14 from Warren. Most of those voters backing Holtflocked to DiMaio on the second ballot.

"I was very optimistic when I saw the split in Hunterdon," saysWarren County GOP Chairman Doug Steinhardt. "The fissure between Erik and Matt was enough to pull toward John in the second ballot."

A53-yeard old former mayor of Hackettstown and contractor universally affirmed here as a gentleman, DiMaiostands onstage and thanks his supporters, vowing to represent the entire 23rd District.

His win comes as ajolt to the Holt camp, which wasbracing forwhat they bitterly thought would be theinevitablePeterson victory.

Two Assembly seats are in play in the June primary – the one DiMaio now occupies, and asecond, whichAssemblyman Michael Doherty (R-Washington Twp.) plans to leave behind in order to challenge state Sen. Marcia Karrow (R-Raritan Twp.).

News leaked two weeks ago that Hunterdon CountyGOP Chairman Henry Kuhl told Peterson and Holt he would givehis county'sorganization line to DiMaio regardless of the outcome of today's special convention election.Everyone understood his reasoning. He wants to protect Karrow's chances against the Warren County-based Doherty by running her with a Warren County candiate – DiMaio.

Now DiMaio stands victorious, and the likelihood is that today's second top vote-getter, Peterson, will run on the line as Hunterdon County's candidate for the Assembly on a District 23 ticket with Karrow and DiMaio.

"To go and sit rather dismally in the minority," former Assemblyman Guy Gregg says with a wink and a grin.

GOP sources here today are already callingPeterson a done deal for the line, but he chooses his words carefully.

"I'm going to go home andsee my wife and kids. Tomorrow, my baby gets baptized," Peterson says. "On Monday, we'll think about it. If there's an open seat, I'm inclined to run."

He's up for reelection to the freeholder board this year, as is Freeholder Ronald Sworen.

"I'm going to take a week to think about this," says Holt, when asked whether he would run for his freeholder seat again, or take an off-the-line swing at the Assembly seat.

Based on his showing here today with the county commtitee, Peterson appears to have a decided edge with Kuhl,an inside track secured – if even only tacitly – becauseof Peterson'sclose friendshipwith U.S. Rep. Leonard Lance (R-Clinton Twp.).

“I am very close to Erik and certainly wish him well,” Lance says shortly before the machines close for the second round of voting. “This is a decision for the county committee to make. Certainly I’m closest to Erik of the three candidates."

For the record, Kuhl tells PolitickerNJ.com he intends to sit down this coming week with Peterson and Holt to discuss the future, while Hampton Mayor Rob Walton, who nominated Peterson today, says he will run for Hunterdon County Freeholder. 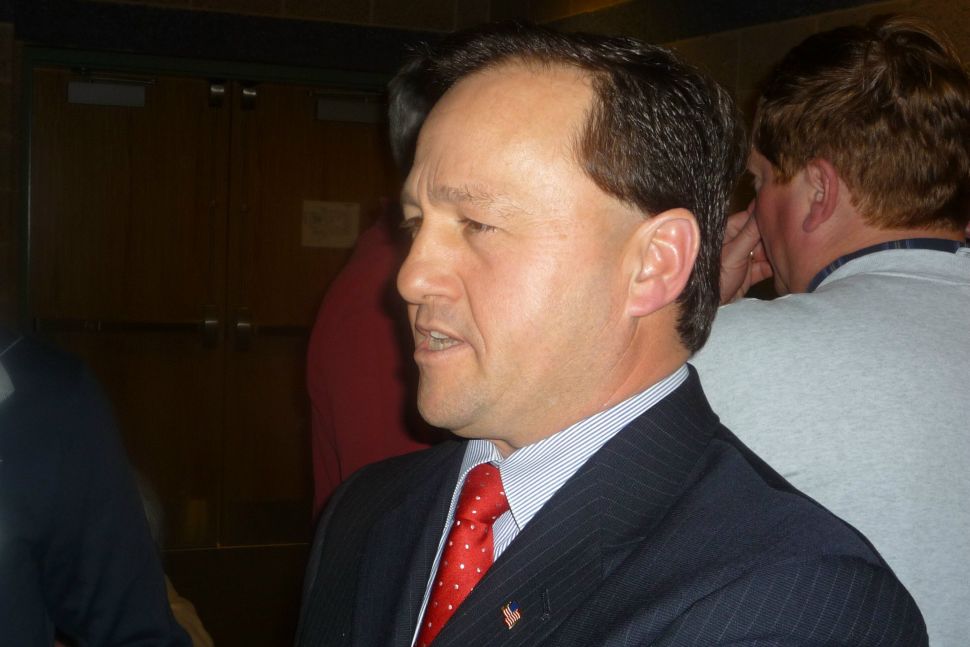