There are three votes worth watching on Saturday:

1. In District 23, Republican County Committee members from Hunterdon and Warren counties will meet to elect a new Assemblyman. Hunterdon Freeholders Matthew Holt and Erik Peterson, and Warren Freeholder John DiMaio face off for the Assembly seat left vacant earlier this month when Marcia Karrow (R-Raritan) took her seat in the State Senate. Hunterdon GOP Chairman Henry Kuhl has promised at least one Assembly seat to Warren County, so if DiMaio loses tomorrow, he'll still be on the organization line in the June primary for the seat Michael Doherty (R-Washington) is giving up to challenge Karrow for the State Senate. If DiMaio wins the special election convention, Holt and Peterson can fight it out in April for the other Assembly seat.

2. The first-in-the-state Republican gubernatorial convention is in Union County, where former U.S. Attorney Christopher Christie has a substantial lead among endorsements from party leaders and elected officials. With former Bogota Mayor Steven Lonegan seemingly a lock for second place, the real race is the one for third place between five-term Assemblyman Rick Merkt (R-Mendham) and Brian D. Levine, the Mayor of Franklin Township. There is not a lot of room for another candidate in a field that looks to be as many as seven, and if someone were to break out of the pack, it can be either one or the other. Merkt may have the edge: his campaign manager, former Hillsborough Councilman Christopher Venis, is a longtime political operative with roots in Union County as an aide to U.S. Rep. Bob Franks and as a member of a Union County-based local political consulting firm. The other three candidates, Morris County Freeholder Jim Murray, and businessmen David Brown and Dennis Knight, are not participating in the Union County vote.

3. In Woodbridge Fire District #1, a former Council President, congressional candidate, and GOP Municipal Chairman is seeking a political comeback that he hopes will give him a base to run for higher office again, or at least option an appointment if Republicans win back the governorship this year. Kenneth Gardner is running for Fire Commissioner. Gardner ran unopposed in 2008 to fill the last year of a three year term left vacant when Gary Robertson moved out of the fire district. Gardner faces a challenge from fire captain Ryan Horvath, who has no political ambition beyond the firehouse. 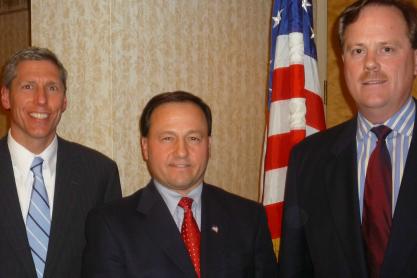