South Jersey sources report that Camden Mayor Gwendolyn Faison tonight announced she would not run for reelection in June, and endorsed the mayoral candidacy of state Sen. Dana Redd.

Appointedmayor afterthe scandalous collapse of her predecessor,elected in 2001 and then reelected in 2005, the 82-year old Faison made her announcement at a state management forum in the Malandra Hall Community Center.

Population 79,000, Camden is unique among New Jersey municipalities in that it is directly managed by thestate under the provisions of the Municipal Rehabilitation and Economic Recovery Act (MRERA), which has been in effect here for seven years.

Tonight, Faison made a presentation about MRERA and let her supporters know of her intentions to retire from the mayor's office and support heavy favoriteRedd, who has the machine backing of the Democratic Party. 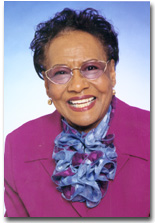