New Jersey has one of the most powerful governorships in the nation, but on agricultural issues, the Governor has relatively little clout – the result of a deal with South Jerseyans to gain political support for the ratification of the 1947 State Constitution. As a result, the Governor has limited say on the appointment of one member of his or her cabinet, the Secretary of Agriculture, and even takes direction from an agricultural trade association on the appointments of policy-makers. This is a throwback to the old days when state boards exercised considerable power, especially in the areas of health, education, the environment, and alcoholic beverage control.

The eight members of the New Jersey Board of Agriculture are elected by members of the agriculture community at the State Agricultural Convention. By tradition, the Governor then appoints the choices of the convention to four-year terms on the Board, with the consent of the State Senate. The Board sets policies that direct the Secretary of Agriculture and the New Jersey Department of Agriculture. By law, the top four commodity groups in the state – based on a "two year average of the gross value of production," according to the department website – are entitled to seats on the Board.

The Board also nominates the Secretary of Agriculture (SOA), who becomes a cabinet member with the Governor's approval. Unlike other cabinet posts, where the Commissioner runs the department, the SOA is essentially the secretary to the Board.

New Jersey's first Secretary of Agriculture was Alva Agee, an agriculture professor at Rutgers who was named when Gov. James Fielder created the state Department of Agriculture in 1916. Agee remained in office until 1925. He was followed by William Duryee, whose main clout came as a member of the state Milk Control Board.

Alampi's successor was Arthur Brown, the Atlantic County Agricultural Agent who was picked at the suggestion of Gov. Thomas Kean, at the suggestion of then-Assemblyman William Gormley. Brown stayed until 2002, and was replaced by Gov. James McGreevey's choice: Charles Kuperus, a Republican Freeholder from Sussex County.

Kuperus stepped down at the end of last year at the request of the state board, and is expected to be replaced by Douglas Fisher, the Chairman of the Assembly Agriculture and Natural Resources Committee. 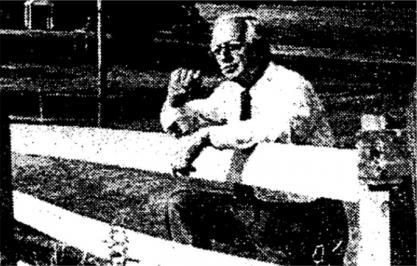