CLINTON TWP. – Undeterred by a hotel bar television set in the next room that jars the chandeliers with each apparent dramatic upswing, 50 people pack the chairs in the Holiday Inn ballroom here on the outskirts of downtown as three Republicans make their respective cases for why they should be the next assemblyman from the 23rd Legislative District.

Theyrecognize faces in the crowd tonight, including that of Hunterdon County Republican Party Chairman Henry Kuhl, who impassively says to a visitor, “Welcome to God’s country,” to the question of who’s going to win the contest.

Sponsored by the Clinton Township Republican Club, this is the same brook and hamlet part of the state that launched the political career of U.S. Rep. Leonard Lance (R-Clinton), a political moderate whose 7th Congressional District victory last year gave the GOP something to savor in an otherwise frigid political year for Republicans – but also left the harder right wing of the party agonizing about its future.

Now DiMaio, Holt and Peterson try to outwork one another to replace Karrow, and in the process, make their statements about the direction of their party, awaiting Saturday’s verdict at a special convention election.

Notwithstanding Lance’s reputation as a diplomat who works across the aisle, this is a 2-1 GOP district where people seldom utter the word “democratic” except as a small “d” adjective generally describing those proud American principles espoused by Republicans, and where Doherty – now scratching out an off-the-line primary bid against Karrow – is regularly the top vote-getter in Assembly races.

Although it’s Peterson who enjoys the closest personal relationship with Lance of the three men, Holt’s the candidate who – at least in a forum like this – appears on most of the issues to be the most easily identifiable Lance-style moderate.

He loosens up the crowd with some homespun references to the Holiday Inn and Clinton Twp., where he served as mayor, then gets to the heart of his message: you create revenue not by growing government but by cutting taxes and putting money back in people’s pockets to establish growth potential.

Inevitably the questions tack into the territory of social issues, and like Lance, Holt’s personally pro-life – but pro-choice when it comes to crafting law.

“I’m an individual who believes very strongly that the government not preach morality,” he tells the crowd. “Roe v. Wade is here. I don’t see at this moment in time where we’re going to see that overturned. I believe very strongly that we need to be promoting the best education possible within our churches and within our homes.”

Both self-described fiscal and social conservatives, DiMaio and Peterson occupy the rightward ground.

“I’m 100% pro-life,” says DiMaio, the father of two daughters. “I will protect the unborn. One of the things I think we need to do at the state is strengthen adoption laws.”

There’s at least one gratified murmur in the audience.

“I am pro-life, from conception to natural death,” he says. “I believe we need to change our culture and promote life. Making adoption a viable option to abortion is critically important.”

A question comes out of the crowd concerning a piece of get-tough legislation written by Doherty, which would build on the much celebrated Lance Amendment by requiring counties and municipalities to seek voter approval before borrowing money for voluntary projects.

“I believe in voter approval of bonding,” says the attorney and father of four. “I don’t like debt. Period. 50 percent of the state budget goes to paying the debt. All we’re doing when we take out debt is we’re taking (our children’s) future. If that’s what it takes to reduce debt burden in the state, I am 100 percent in favor of it.”

“I was mayor of Clinton Township,” says the father of a grown son, whose wife Megan sits in the audience. “Generally, local entities are not the agencies that are borrowing beyond belief; we have an election every single year, and it takes a super majority to bond. …The bottom line is I don’t want to strangle local municipalities. I do have concerns with strangling municipal officials” by requiring voter approval for all projects."

DiMaio goes further than both his Hunterdon County competitors with the revelation that he signed off on Doherty’s resolution earlier in the day – not as it applies to currently slated Warren County projects, but in a larger context.

“At our freeholder meeting today, this issue came up,” says the candidate. “Our assembly people came by and asked this our county support to support Assembly Bill 1880. I support the bill and we’ll see. My position on debt is I’d like to see it eliminated. If the State of New Jersey followed Warren County, we’d have more money for municipalities and schools.”

When he later says he agrees with Gov. Jon Corzine, DiMaio has already headed off any gasps in the room by pointing out that the Democratic governor got at least one right on the issue of two-day furloughs for state workers, which would save the state $35 million.

A questioncomes regarding the candidates’ respective Republican credentials.

“I think I came out of the womb a Republican, in fact, I know I did,” says Holt, grandson ofthe lateU.S. Sen. Clifford P Case, the last New Jersey Republican to win a U.S Senate race in 1972 before he was defeated by social conservative Jeffrey Bell in the 1978 Republican Primary.

Peterson revs it up.

“I was taught the Democrat Party was about socialism and I was taught socialism is bad,” he says, a remark that warms the audience. “That has been ingrained in me. Republican principles are part of who I am.”

The audience waits for DiMaio’s answer, knowing he started his career as a Democrat.

“I was not born a Republican,” he admits, “but I joined the Republican Party. I am a very devout convert, and I will lead the charge to convert more from the Democrat Party.”

Throughout the evening, DiMaio offsets any doubt by repeatedly emphasizing his dedication to streamlined government and state bureaucracy for the betterment of small business. He’s fought the regulations as a contractor in New Jersey, and he wants to make it easier for the next guy trying to make a living here.

For all the issues, and they get into them – state police and COAH and state mandates, and they go to a level of detail, each in his own way – Saturday’s contest may not prove to be about issues or ideology in the end or even about intrigue, despite whispered references to Kuhl’s behind-the-scenes efforts to neutralize Doherty to protect Karrow, so much as Warren/Hunterdon geography, or even simpler, in the words of a longtime God’s country political insider: “personality.” 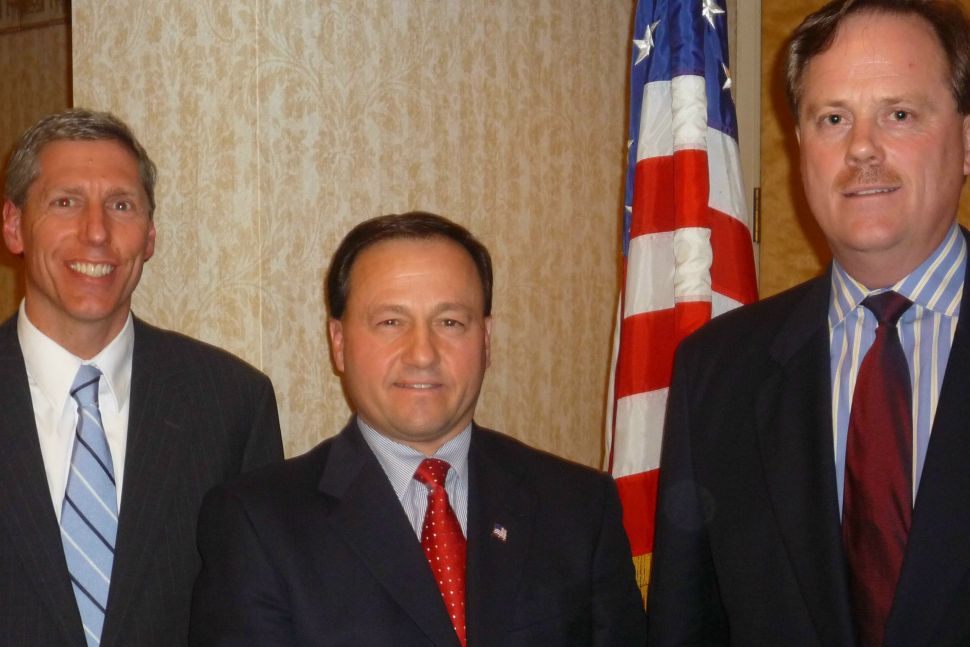