As he endorsed Christopher Christie for the 2009 GOP gubernatorial nomination on Wednesday, former Governor Thomas Kean, Sr. reminded reporters that the only other time he involved himself in a Republican Primary was when his son ran for the U.S. Senate three years ago. That's not completely accurate. During his second term as Governor, Kean went to Hudson County to endorse Albio Sires, a Republican activist from West New York who had been recruited by state Republicans to challenge U.S. Rep. Frank Guarini (D-Jersey City) in 1986.

At the time, Republicans believed they were looking at a possible political realignment in Hudson County. They had won two Freeholder seats in 1984 and four Assembly seats in 1985. Ronald Reagan carried Hudson in 1984, and Kean won every town in the county when he ran for re-election in 1985. The GOP was playing heavily in non-partisan municipal races that year, and was counting on electing a Republican Mayor of Union City, where Assemblyman Ronald Dario (R-Union City) was heading a local ticket – financed by the GOP – that included a young lawyer named Robert Menendez.

Like any fledgling party, Hudson Republicans had some early growing pains. One of their two Freeholders, Octavio Alfonso, who did not speak English, decided he wanted to be the first Republican Congressman from Hudson County since one-termer Vincent Dellay lost in 1958. Alfonso challenged Sires in the Republican primary and lost.

Sires lost his race for Congress, and remained a Republican until the lat 1990's, after winning election as Mayor of West New York. He was elected to the State Assembly as a Democrat in 1999 (defeating an incumbent in the primary as the candidate of the Hudson County Democratic Organization) and became Speaker in 2002. When Menendez went to the Senate in 2006, Sires won his seat in Congress as a Democrat — twenty years after his first try.

Dario won his May 1986 race for Union City Commissioner and was expected to be named Mayor, but Menendez outmaneuvered him for the post in a surprise bid just before the July 1 reorganization. Menendez's election to the State Assembly in 1987, helping Democrats take back the Republican Assembly seat sin Hudson County, marked the end of the three-year surge by Hudson County Republicans.

In 2003, just before the Republican primary, Kean offered a strong public endosement for Robert "Mr. Potato Head" Martin, a State Senator who was fighting off an aggressive challenge from attorney Jay Webber.

Kean also made a strategically timed endorsement of John McCain for the 2008 Republican presidential nomination, at a time when the Arizona Senator had lost his front runner mantra. Kean did not endorse in the 2005 GOP primary for Governor, but he wrote a personal check to Todd Caliguire, his former staffer who finished last.

As he was preparing to leave office in 1989, Kean declined to endorse a successor. But he did give the Tom Kean Seal of Approval to four of the candidates – U.S. Rep. James Courter (R-Allamuchy), former Attorney General Cary Edwards, Assembly Speaker Chuck Hardwick (R-Westfield), and State Sen. William Gormley (R-Margate). By doing that, Kean essentially said he's for anyone but the candidate who wound up coming in fifth, State Sen. Gerald Cardinale (R-Demarest). 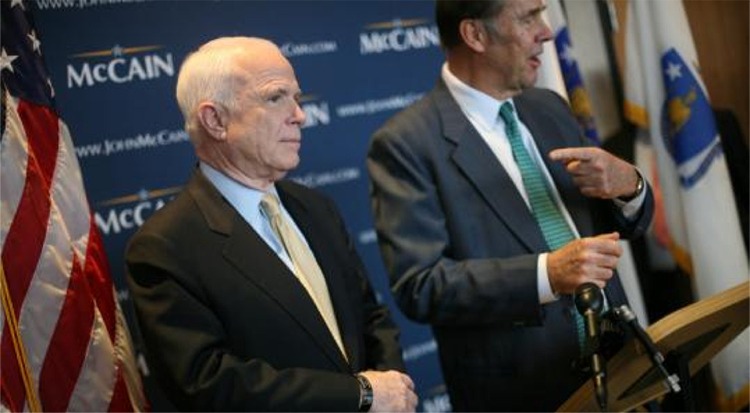